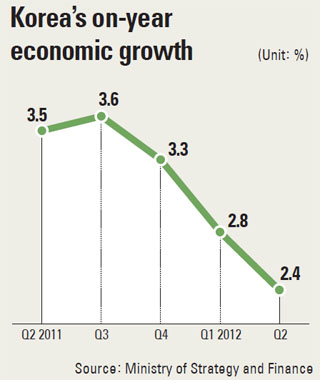 In hopes of boosting the flagging economy, which is losing more steam than earlier expected, the government unveiled a mild stimulus package including tax cuts.

Its move to lower the tax on real estate transactions is its strongest action so far to revive that moribund sector.

Throughout the year, the government has announced property revitalization measures but hasn’t been able to revive the market.

The Ministry of Strategy and Finance announced yesterday it has decided to spend an additional 5.9 trillion won ($5.2 billion) of fiscal support for this year and next year.

When added to the 8.5 trillion won the government announced in June it would spend in the second half to pump life into the economy, the total stands at more than 14 trillion won.

The stimulus will come in the form of tax cuts to encourage spending and increased investments in infrastructure, support for small and midsize start-up companies, and welfare.

Additionally, the government will also shave off 50 percent of the acquisition tax for properties purchased by the end of this year.

Currently, the acquisition tax on buying an apartment is 2 percent for apartments under 900 million won.

For apartments that sell for more than 900 million won, the current tax rate is 4 percent.

The real estate market has been dead for years, and recently housing sales has fallen significantly. In the first seven months of this year, transactions plunged 30 percent from the same period last year.

According to the government, when it temporarily lowered the acquisition tax between April and December 2011, transactions grew 22.6 percent on-year.

Another notable change is the temporary lowering of a special consumption tax when purchasing automobiles and consumer goods such as televisions and refrigerators to encourage consumers to open their wallets. The rate will be cut 1.5 percentage points. The tax rate is different for different categories of goods.

The stimulus measures come as the Korean economy is cooling at a much faster rate than what the government expected earlier.

“The effect of the fiscal crisis in Europe is much greater than we anticipated,” said Choi Sang-mok, head of the economic policy department at the Finance Ministry. “Exports to major countries have started to slow down,” Choi said, “and a chain reaction amplified the negative influence [on the Korean economy].”

The Finance Ministry official said the economic recovery turned out to be much weaker than what had been expected.

Major foreign investment banks have been competing with each other to lower their outlooks for Asia’s fourth-largest economy.

According to the Korea Center for International Finance, 10 foreign investment banks have lowered Korea’s estimated economic expansion for 2012 from 2.9 percent in July to 2.6 percent a month later.

This is far below the Finance Ministry’s readjusted outlook of 3.3 percent growth or the 3 percent expansion projected by the Bank of Korea.

Swiss-based UBS revised its outlook from a previous 2.9 percent to 2.1 percent. The investment bank projected Korea’s economic growth to increase 1.6 percent in the second half of this year. JP Morgan readjusted its projection from 2.9 percent to 2.5 percent, while Deutsche Bank lowered its estimates from 3 percent to 2.6 percent.

It has become evident that Korea’s exports, which are the main driving force of the economy, have been decelerating while the domestic market has been shrinking.