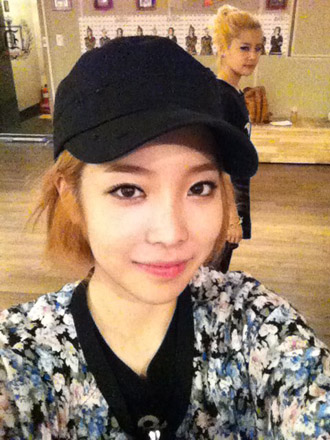 Newbie group D-Unit’s Wooram expressed her concerns for her sister, Boram of T-ara, on a TV show recently.
In an episode of MBC’s “Show! Music Central” that aired on Sept. 8, Wooram said that the last time she saw her sister, “she had lost so much weight, she was just all bones.”

The hip-hop trio group member said that no doubt this was the result of the T-ara scandal that ensued when Hwayoung was booted from the group.
“I think she’s been worrying and stressed out,” said the younger sister of Boram.

Meanwhile, Boram countered the comments made by her sibling by saying, “I’m fine. There’s nothing to worry about, so don’t worry about me.”
It seems the tables have turned as early this year Wooram was the one who passed out during rehearsals, no doubt causing much concert to her older sister.
By Carla Sunwoo [carlasunwoo@joongang.co.kr]