A gallop seen ’round the globe

A gallop seen ’round the globe 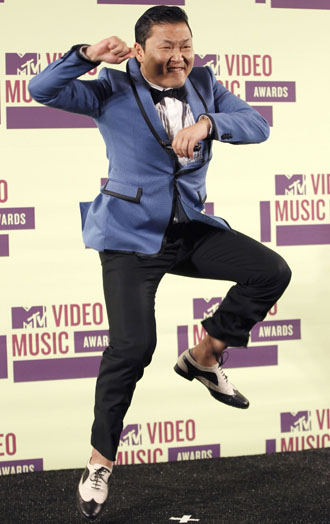 “Psy, dude, you got over 100 million hits on YouTube right now for ‘Gangnam Style,’ okay, and dude, how does that feel? Talk to me Psy!”

Donning a light blue tuxedo with his hair slicked back and shades on, the singer went on to talk to Hart in Korean, saying he was honored to be at the VMAs and always wanted to talk in his native language in front of a U.S. audience. Hart stood befuddled.

The music cued, the galloping resumed and the cameras cut to Emma Watson, who in turn introduced a live performance by Green Day.

Before the 2012 VMAs, Rain was the only Korean to have attended the annual MTV awards show. He received a special invitation in 2005. Last week was a testament to how big Psy has become and, some argue, how much potential K-pop has in the American market.

The dance moves are seemingly everywhere. Employees at a city-run swimming pool in El Monte, California, were recently fired for using the public space to perform the “Gangnam Style” dance en masse, and an assistant Catholic priest in Sangbong-dong, northern Seoul, became a YouTube sensation after filming his own version of the moves.

When Jay Leno of “The Tonight Show” cut to a parody of Mitt Romney’s entrance at the Republican National Convention late last month, the U.S. presidential nominee was shown kicking out and smoothly sliding in his right leg as he glided onstage before galloping toward the podium.

“You could see him trying to appeal to that younger voter, that younger demographic,” Leno joked before showing the clip.

Psy is neither cool nor sexy. He has said he made the music video for the song with silly, ridiculous clips in mind, hoping to become a hit in Korea by playing on the Beverly Hills-like culture of southern Seoul’s Gangnam District.

“I don’t look like Beverly Hills and I keep saying, ‘I’m a Beverly Hills guy, I’m Beverly Hills style, what’s up man?’ And they’re saying [laughs], ‘What?’?” the singer explained during a recent interview with ABC’s “Nightline.”

Since releasing the video on July 15, “Gangnam Style” has amassed 130 million YouTube hits. It took only 52 days for the song to reach 100 million, the shortest time to reach the milestone in YouTube history. Lady Gaga’s “Poker Face” (2008) reached the mark in three years.

But rising to fame so quickly has left many wondering who is the man behind the designer shades and how did he learn to write such catchy hooks and gallop so elegantly? And what does the Korean star, who just signed with Justin Bieber’s manager, mean for the future of K-pop?

The Korea JoongAng Daily looks at the star from the beginning, tracing his path from his hit song “Bird” to a military scandal and the VMAs.

Various YouTube users around the world inspired by Psy’s “Gangnam Style” music video have created remakes of their own. [JoongAng Ilbo]

Psy is in fact a Gangnam man. He was born to well-off parents in Seoul’s booming district south of the river and attended Banpo Middle School and Sehwa High School in the area.

Like many young adults from Gangnam, he moved to the United States for college, briefly attending Boston University in 1996 and Berklee College of Music before dropping out and moving back to Korea.

He debuted in 2001 with his first album “Psy From the Psycho World,” which felt like some alien invading the nation’s music industry where only plastic girls and boys dwelled.

With his straightforward lyrics and energetic dance that was strong enough to ripple his belly fat, Psy instantly soared to fame upon his debut.

Although Psy had studied Berklee College of Music and composed and produced the music himself, he was willing to make fun of himself. He flapped both of his arms up and down as if he were a bird for a title track when he debuted, grabbing the attention of Koreans and becoming synonymous with the bizarre dance moves.

“Korea was kind of strict in those days, and my lyrics were too much, too ahead in the times for my country at the time [of debut],” Psy told the JoongAng Sunday. “They were like, ‘what the ... ’”

But his career started to run out of gas - and hit a few roadblocks - shortly after his hit “Bird.”

Psy soon became labeled by Korean society as a young man who was overwhelmed by his sudden fame after he was caught smoking marijuana the year he debuted. His second album released shortly after the scandal didn’t meet expectations.

After a third album, the singer entered the military in 2003. But it was revealed that the entertainer had held concerts while serving as a commuting soldier and earned a profit, violating Korean military policies and subjecting him to a second term.

In 2007, after scrutiny from the public over a very sensitive issue in Korea, the singer entered the military again for another two years. While serving, his twin daughters were born. He finished his service in 2009, determined to put the tumultuous period behind him and focus on the future.

It didn’t take long for Psy to reclaim his fame. His music video went viral in an instant.

According to the JoongAng Ilbo, “Gangnam Style” has been searched on YouTube from 220 countries so far. The number is even higher than the number of states in the United Nations.

People in the United States have searched “Gangnam Style” the most with 19.4 million; Korea with 17 million; Thailand with 8.9 million and Malaysia with 6.8 million. People in African countries such as Uganda and Zimbabwe have also searched the music video thousands of times.

During a recent interview with the JoongAng Sunday, the 35-year-old singer said he “doesn’t want to over-predict success,” but he has already gone further than any Korean artist before him.

The singer recently signed a contract with Schoolboy Records, run by Scooter Braun, for management in the United States. Braun is best known as the manager of Justin Bieber.

He also signed another contract with Universal Republic Records to distribute his albums across the world except in Korea and Japan. Braun said in a short clip that was made public six days ago that they’ve “come to an agreement to make some history together.”

He added that Psy “will be the first Korean artist to [make] a big record in the United States.” In the end, Psy and Braun exchanged shots of soju over a toast: “To Psy, to Korea, to breaking down barriers, to the future.”

A number of young and pretty Korean pop singers have been tirelessly attempted to penetrate the world’s largest music market, but all have failed so far. But Psy, who had no intention in doing so, seems to have shattered the cultural barriers.

The explosive popularity of “Gangnam Style” still remains a mystery to many, including those in the foreign media. Bloggers, columnists and reporters analyze every single word of “Gangnam Style” lyrics, thus the Korea JoongAng Daily also joins the “Gangnam Style” craze and finds out why the singer has become a sensation and how the music video has gone viral.


Humor has it all

Music critics say much of Psy’s success comes from his humor.

“Psy’s ‘Gangnam Style’ is one of the top 10 most downloaded music videos on iTunes. He was also invited by the MTV VMAs,” says music critic Bae Sun-tak. “These are obvious signs that his music video talks something to the world audience [who don’t understand Korean] and much of the credit goes to Psy’s sense of humor.”

“I did the same kind of dancing,” Psy says. “When I read the replies on YouTube, I could see the comments from people overseas - they were the same as Koreans’ reactions when I made my first record.”

By taking the helm of his music video for “Gangnam Style,” Psy came up with about 20 silly ideas such as sunbathing at a playground and dancing in the elevator, but only 10 of them made it to the music video.

Everyday locations were chosen such as a bus, sauna and yoga class to make it look cheap. When asked about the total costs for the video, a spokeswoman for YG Entertainment said she couldn’t comment, citing company policies. But experts estimate the costs would be far lower than that of average Korean music videos, which often look like films.

Apart from the electro-pop beats of “Gangnam Style,” which are familiar to many music fans across the world, social-networking services played crucial roles in spreading “Gangnam Style.”

YG Entertainment is well aware of the SNS’ potential.

“There is a slim chance of success compared to the investment costs in North American market,” the spokeswoman for YG says.

The JoongAng Ilbo recently analyzed how “Gangnam Style” has spread over Twitter with the help of Treum, a company analyzing Internet users’ social media behaviors.

According to the analysis, the spread of “Gangnam Style” is divided into five phases. And the number of tweets and the number of YouTube hits rise at nearly the same pace.

The first phase started as Hollywood celebrities such as rapper T-Pain and Braun mentioned “Gangnam Style” on their Twitter accounts and posted links to the YouTube music video. Between the second to fourth phases, K-pop fans in Singapore, Thailand, Malaysia and other countries joined the “Gangnam Style” craze.

The fifth phase started as other celebrities such as Katy Perry, Britney Spears, Tom Cruise, Josh Groban and Robbie Williams started to mention “Gangnam Style” as well. Around the fifth phase, U.S. major publications such as The Wall Street Journal, The Los Angeles Times and Time magazine started to cover Psy.

The popularity of Psy and his “Gangnam Style” doesn’t show any signs of waning, but some Internet users think it is just one of those passing trends.

“The majority of Americans don’t take Korean performers seriously. Here comes a fat, funny little Korean jumping around,” an Internet user who goes by ID Rex said on a comment at a column analyzing the Psy phenomenon on The Wall Street Journal Web site.

“Americans like Psy because he’s acting like a clown. Whenever he tries to do something serious, sing a legit song displaying his talent, then his popularity will wane. He’s a flash in the pan.”

But Bernie Cho, a president and strategic planning director of DFSB Kollective, gives a rosy outlook.

DFSB Kollective is a Seoul-based talent agency for K-pop artists. The company promotes some 350 Korean artists’ music to overseas, especially in North America.

“Considering how far and how fast he has come, it’s hard to predict how much further he can go,” says Cho.

“Just because he’s funny and quirky doesn’t mean people don’t or won’t take him seriously as an artist. He has recently signed a record deal with the biggest record label in the world and with one of the best agents in the world [which] is a winning combo that could help take him to the next level.”

“Given Braun’s success in discovering YouTube stars and developing them into international pop superstars like Canada’s Justin Bieber, Psy has a great shot of making it big in the U.S.”