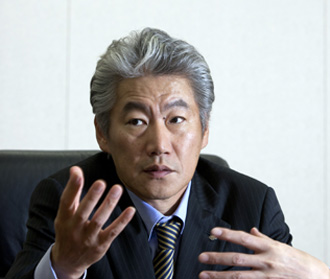 “We are not going to lower the flag as a global bank,” Nagai, 53, said in an interview in Tokyo on Friday. “We want be an Asia-based global investment bank.”

The forecast may be a relief to investors, who have seen the stock drop to near a 37-year low as the 2008 purchase of Lehman Brothers Holdings’ European and Asian units swelled costs that led to nine straight quarters of losses abroad.

Nagai aims to arrest the slide by paring $1 billion in expenses and improving wholesale banking operations. He is considering acquiring an investment bank in Asia to increase revenue there.

“Nomura was trying to do too much in too many places and wasn’t profitable outside Japan,” said David Marshall, an analyst at Creditsights Singapore. “Adopting a more focused strategy should help to improve operational efficiencies.”

The company said last week it will reduce costs by $450 million in Europe and the Middle East, $210 million in the Americas and $340 million in Asia including Japan. About 45 percent of the cuts worldwide will be from trimming staff, with the rest coming from other operational expenses. The bulk of the job losses will be in investment banking and equities, it said.

“The trick is to try and juggle it so that you gain more than you’re giving back,” he said. “These cost cuts are targeted at the right areas because they’re targeted at businesses which have been suffering the sharpest declines in revenues over the last couple of years or so.”

The latest initiative contrasts with a $1.2 billion expense-reduction program of last year that focused more on job cuts. About 63 percent of that money was saved by shrinking payrolls, the bank said.