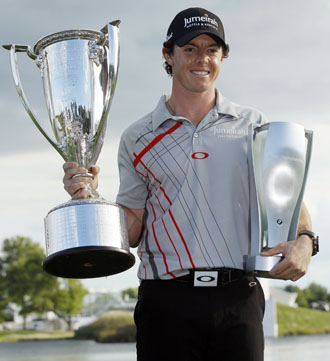 CARMEL, Indiana - World number one Rory McIlroy continued his red-hot form when he cruised to his third win in four starts with a two-shot victory at the BMW Championship on Sunday that locked in the 30-man Tour Championship field.

With a glittering leaderboard featuring six major winners and four players who have held the number one ranking packed into the top 10, McIlroy carded a five-under 67 at Crooked Stick Golf Club to collect his fourth PGA Tour win of the season and second in seven days.

The mop-topped Northern Irishman finished 20-under par and will head to the Sept. 20-23 Tour Championship in Atlanta as the favorite to walk away with the $10 million bonus that will go to the FedExCup points leader.

Former world number one Lee Westwood of Britain and four-time major champion Phil Mickelson of the United States tied for second place at 18 under par.

“I just wanted to go out and play as best as I could,” said McIlroy, adding he plans to go to New York next week and train with the NBA New York Knicks. “I knew if I played to my ability that I would win events.

“I didn’t think that everything would happen so quickly, but I’m just on a great run at the minute and trying to keep that going for as long as possible.”

If there was any doubt, the victory over the all-star lineup confirmed McIlroy’s status as golf’s dominant player.

He becomes the first golfer since Tiger Woods in 2009 to win PGA Tour events on back-to-back weeks and joins Woods and Jack Nicklaus as the only players since 1960 to win six PGA Tour titles before the age of 24.

With four PGA Tour wins, including a second major at the PGA Championship, McIlroy also moves into pole position to claim player of the year honors.

“Rory was putting on a show out there,” praised Woods, who was partnered with McIlroy through the opening two rounds. “He’s doing the things he needs to do and as he said, he’s feeling very confident about his game.

McIlroy began the day a shot back of overnight leaders Mickelson and Vijay Singh, but was on the move quickly with birdies at the second and fifth before topping the leaderboard to stay with back-to-back birdies at nine and 10.

The 23-year-old then pulled away from the field with two more birdies at 15 and 16 to open up a three-shot cushion with two to play.