Park calls on North to give up nukes, seek new path

Park calls on North to give up nukes, seek new path 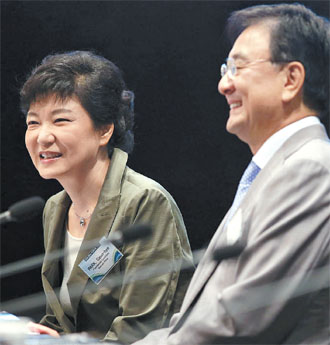 Park Geun-hye, left, the presidential candidate of the ruling Saenuri Party, talks with Hong Seok-hyun, chairman of the JoongAng Ilbo and JTBC, at the J-Global Forum held at the Shilla Hotel in central Seoul yesterday.[NEWSIS]

Park Geun-hye, the presidential candidate for the ruling Saenuri Party, yesterday urged North Korea’s new leadership to be more active in seeking transformation and to choose a new path rather than simply remain an isolated country.

“I hope the new leadership of the North seeks transformation in a more aggressive manner,” Park said yesterday. “North Korea should no longer remain as an isolated island in international society but choose a new path.”

Park’s remarks were made at the 15th J-Global Forum jointly hosted by the JoongAng Ilbo, JTBC and the Yumin Cultural Foundation under the theme of “Strategic Questions in East Asia: Burdens or Windows of Opportunity to New Leadership?”

The annual forum, which took place at the Shilla Hotel in Jangchung-dong, central Seoul, invited some 100 guests, from journalists to academic experts, from 10 different countries, including South Korea, the United States, China, Japan and Russia.

The forum has been held since 1996 in the name of the Asia Press Forum before taking a new title in 2007 on the occasion of its 10th birthday.

“[North Korea] should give up its nuclear weapons program and make a decision that would fundamentally improve people’s lives,” Park said.

It is the first time that Park has revealed her thoughts on diplomacy and security matters in public ever since she was elected the ruling party’s presidential candidate last month.

In regard to recent issues of tension in the East Asian region such as the conflicts over territory and history, Park emphasized the importance of trust when promoting diplomacy based on global norms.

“Asian countries should, of their own will, resolve conflicts in a peaceful manner, which will allow Asia to step forward while maintaining stability,” she said.

In his opening remarks, Hong Seok-hyun, chairman of the JoongAng Ilbo and JTBC, also highlighted the changing international order countries are facing today and the importance of cooperation, particularly within Asian nations.

“As historian Arnold Toynbee predicted, the center of civilization is once again moving westward from the Americas to Asia and it is emerging as the new world center of gravity,” Hong said. “What worries us is the fact that neighbors in the region do not seem to share the common dream, ensnared in traps including controversies revolving around history and territories.”

Nevertheless, the chairman said Asia should “fulfill the task bestowed upon it by humanity, continuing to march forward to the goal of genuine concert and cooperation.”

“No matter how long it takes, we shall never give in,” he said.

Speakers and panelists of yesterday’s forum shared profound insights on issues such as the territorial disputes in Asia including over Korea’s easternmost Dokdo islets and the Senkaku Islands, the future of inter-Korean relations after leadership changes on the peninsula, and the conflict rising between the United States and China.

Discussions were mainly focused on the challenges the Asian region faces today.

“Territorial disputes [between Korea and Japan] have made deep scars,” said Sohn Yul, dean and professor of the Graduate School of International Studies at Yonsei University. “It will take an extended period of time to be able to return to the pre-dispute regime.”

Brahma Chellaney, professor at the Center for Policy Research, also said, “Asia is integrated economically but more divided politically, and this isn’t a recipe for peace and stability.”

“Economics alone will not be sufficient enough to create good will or to stabilize good relationships,” he said.

Regarding the United States refocusing on the Asia-Pacific region, Pan Zhenqiang, senior adviser at the China Reform Forum, concluded that “China is concerned but not alarmed.”

“Beijing would certainly take due steps to respond to the adverse consequences of the new developments,” Pan said.