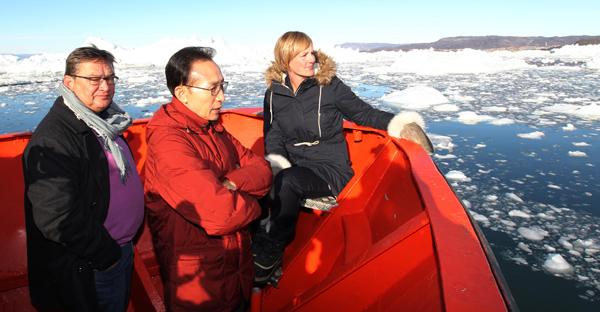 Lee arrived in Greenland earlier in the day to take a first-hand look at problems resulting from climate change and to hold talks with Premier Kuupik Kleist of the Danish autonomous territory about green growth, resource development and Arctic shipping routes.

Upon arrival at the airport in the small town of Kangerlussuaq, Lee flew on a light plane to Ilulissat, a Unesco World Heritage site known for its famous icefjord, one of the best locations to observe melting Arctic glaciers, icebergs and ice sheets.

“This is a tragic site,” Lee said aboard an icebreaker while touring the ice-floating sea, apparently meaning that global warming, caused by economic development, is having serious impacts on the environment.

“Residents here experience climate change every day,” the premier told Lee. “The look of glaciers today is different from a few days ago. If glaciers melt, water levels change and weather changes too. Residents always have to adjust to and overcome this.”

Melting occurred on about 40 percent of the surface of Greenland’s ice sheets on July 8, but it expanded to 97 percent only four days later. A massive glacier twice the size of Manhattan broke off from Greenland recently, officials said.

Carbon dioxide and other heat-trapping gases are blamed for warming the globe.

In an effort to tackle the issue, Lee has championed what is dubbed the “low carbon, green growth” policy, one of Lee’s trademark policies that calls for seeking economic growth through environmentally friendly technologies and industries without releasing greenhouse gases.

Greenland is also rich in oil, rare earth materials and other resources. According to the U.S. Geological Survey, about 17 billion barrels of oil are estimated to be buried along Greenland’s western coast, with another 31.4 billion barrels along the northwestern coast.

Greenland is also believed to be holding the world’s largest reserves of rare earth materials. At least 10 regions have been confirmed to be holding the increasingly important resources, with the southern region holding enough reserves to meet 25 percent of global demand, officials said.

During the flight to Ilulissat, Prince Frederik told Lee that he hopes countries like Korea will help develop Greenland while preserving its environment. Lee said in response that he came to Greenland with “the spirit of green growth.”

Later in the day, Lee held talks with Kleist about ways to boost cooperation in green growth and resources development, saying Korea is willing to work actively together to transform “environmental crisis” into “economic opportunities.”

The two sides also signed four memoranda of understanding calling for cooperation in resources development, geological survey and Arctic science and technology. The agreements are expected to serve as a foothold for Korea’s participation in Greenland’s development.

“South Korea wants to seek economic development in a way that Greenland remains green,” Lee said during the signing ceremony. “I hope Greenland will be preserved as Greenland forever. In this sense, South Korea can be a good partner.”