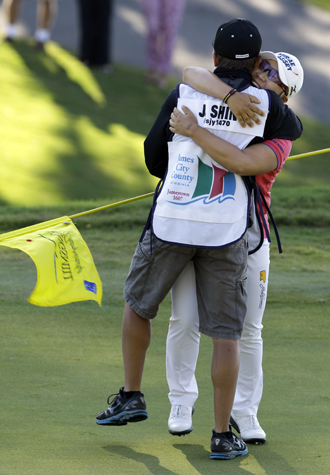 Shin Ji-yai hugs her caddy as she celebrates winning the Kingsmill Championship LPGA Tour golf tournament in Williamsburg, Virginia, on Monday. Shin won the tournament in a nine-hole playoff with Paula Creamer. [AP/YONHAP]

With little time to bask in a hard-earned victory after the longest playoff duel in LPGA history, Shin Ji-yai boarded a plane early yesterday for Britain, where she will look to repeat her success at the Women’s British Open.

Shin tees off at the major championship on Thursday. The 24-year-old nine-time LPGA winner is looking for the first back-to-back win of her career after holding off Paula Creamer at the Kingsmill Championship in the U.S. on Monday.

A victory at the Royal Liverpool Golf Club would earn Shin her second British Open title after winning the event in 2008 and send a message that the former world No. 1 is back at full strength.

“I will work hard and try to maintain a positive attitude,” she told reporters, speaking about her preparations for the Open. “I will play well this weekend.”

Play on Sunday wasn’t enough to decide the winner with the two returning to the course the following morning. Shin carded a par on the ninth hole as Creamer bogeyed.

The previous record for the longest two-player playoff on the LPGA Tour was set eight years ago during another Korean vs. American battle. Cristie Kerr of the U.S. beat Korean Jeon Seol-an on the seventh playoff hole of the 2004 Takefuji Classic.

Shin led the first two days with 12-under 130 in total but Creamer, who was two strokes behind, shot to the top of the leaderboard on Saturday with six-under 65 as Shin settled for a two-under 69.

Shin said the cold, windy weather on Monday morning as well as the crowd were distracting for her, but she tried to focus on her game alone. She said it was a physically and mentally challenging victory.

“The last putt for the victory was only 40 centimeters away from the hole, but still, I was really nervous,” she said.

Shin, whose last LPGA win was at the Mizuno Classic in November 2010, said she was hungry for a victory.

“I wanted to win and I think the same was true for Paula. It was a good game,” she said in an interview with J Golf, a golf cable channel affiliated with the JoongAng Ilbo.

A golf prodigy who dominated her country’s professional league in her teens, Shin made a name worldwide when she won three LPGA events including the British Open in 2008, a year before she acquired membership to the LPGA Tour.

She won five more events in two years through 2010, replacing Lorena Ochoa of Mexico as the world’s top female golfer.

She went into a slump early last year after getting Lasik vision-corrective surgery in order to play without her thick glasses. Back and wrist injuries also kept her struggling as her ranking fell to 13th until last month.

She got surgery on her hand in June and took two months off. It was at the Canadian Women’s Open last month where she heralded a long-awaiting recovery with a joint third-place finish.

With the Kingsmill victory, Shin’s ranking jumped to the 10th.

“I didn’t expect the win would come this quickly .?.?. I thought it would take much longer,” Shin said. “Happiness finally is on my side.”

A win at the British Open, a major event with a total purse of $2.75 million, could lift her standing much closer to the No. 1 spot.

Many other Korean players will compete this weekend. Before Shin won the Kingsmill Championship, four other Koreans had already won an LPGA event this year including Yoo Sun-young at the Kraft Nabisco Championship, Choi Na-yeon at the U.S. Open, Park In-bee at the Evian Masters and Ryu So-yeon at the Jamie Farr Toledo Classic.