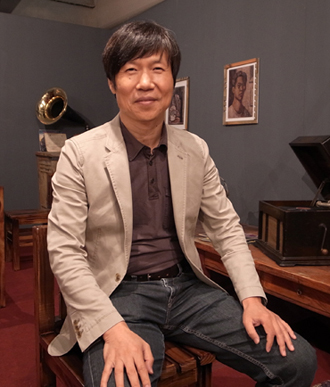 The title of Seoul Museum’s inaugural exhibition is “Dung-seob, Go to Renaissance!” Dung-seob is a pronunciation of Jung-seob in the dialect of a North Korean region where artist Lee Jung-seob was born. And “Renaissance” was the name of a cafe in Busan in the 1950s.

So what is the connection between an artist born in the north and a southern port city cafe?

“During the Korean War, many artists, including Lee, fled to Busan,” said museum director Yi Joo-heon. “They would gather at the Renaissance cafe to talk about art and communicate with Busan-based artists.

“In addition, Lee and four other artists held an exhibition at the Renaissance in 1952; cafes were important exhibition places for Korean artists in the 1950s, as they couldn’t find better places amid the ruins of the war,” Yi continued. “So our inaugural exhibition is an homage to the 1952 show at the Renaissance cafe and the artists who never gave up art even during the war and the accompanying poverty, and strove to make a renaissance of Korean modern art.”

The other four artists are Han Mook, Park Ko-suk, Lee Bong-sang and Sohn Eung-seong. The exhibition features about 70 paintings and drawings by the five artists and Jeong Gyu, who was close to the group.

Asked whether future Seoul Museum exhibitions will also focus on Korean modern artists in the early 20th century, Yi said, “No, we will hold various exhibitions ranging from old artifacts to contemporary art. We will not depend much on the museum’s permanent collection.

“But these exhibitions will have a consistent principle; they will be friendly to the general public.”

Yi, 51, an established writer, is someone who has helped the Korean public feel more familiar with fine art over the past 15 years or so. The former journalist has written several best- and steady-sellers about art, including “50 Days Around the Museums of Europe” and “Museum of Knowledge.” He also served as director of Hakgojae, a major commercial art gallery, from 1995 to 2004.

“By public-friendly art exhibitions, I don’t mean shows concentrated on popular artists or paintings easily understood and loved by the public,” Yi said. “Our exhibitions could include even conceptual art commonly considered to be difficult to understand. We will show such works in the way that the public could feel comfortable and be interested about them.

“I hope the museum with a beautiful garden of Seokpajeong in it will become a garden of people in downtown Seoul - a healing and resting place.”