Lone wolves multiply, but so do risks

Lone wolves multiply, but so do risks


Making ends meet is no piece of cake for 48-year-old Yang Jeong-seok, who left his job as a sales manager at a high-profile insurance company last year to open a small restaurant selling traditional Japanese tonkatsu, or breaded pork cutlet.

Wearing sweatpants and a stained white T-shirt, Yang said he is used to getting his hands dirty, doing menial chores and racking his brain to drum up ways of attracting more business, as he hopes to avoid the miserable fate that has befallen hundreds of new entrepreneurs this year.

“I can’t afford to hire any help,” said Yang, who was busy scrubbing kitchen utensils after a day’s work at his eatery in Poyi-dong, southern Seoul, when sales added up to a meager five meals.

Pressured to resign last year as his former employer winced from the economic downturn, and driven by the need to provide for his family, including one 18-year-old son who has autism, he decided to set out on his own.

Now he ranks among roughly 10 million self-employed men in the country who are living month-to-month by running their own businesses using loans taken out after they retire. 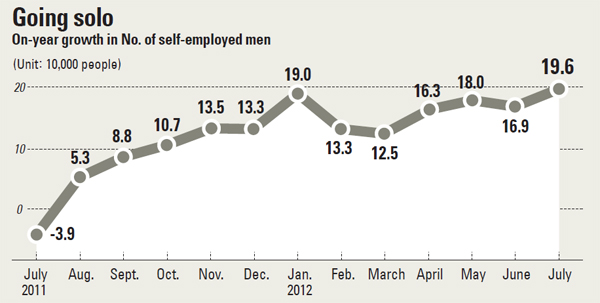 According to Statistics Korea, their numbers swelled by 196,000 in July compared to the same period one year earlier, marking the biggest jump since April 2002. The figure has been steadily rising for the last 12 months.

This growing trend poses a major risk to the economy, not to mention their livelihoods, as most of them have no prior experience of running their own businesses.

The growth in the number of self-employed men is largely attributed to the mass retirement of so-called baby boomers, or those born just after the 1950-53 Korean War ended, in the years between 1955 and 1963.

The retirement wave began in 2010, led by the eldest who were born in 1955. Since the Korean economy experienced a downturn in the wake of the 2008 global credit crunch, large companies began laying off employees, especially those in their 40s or 50s, to cut costs. Baby boomers account for 30 percent of all self-employed businessmen in the country.

As people in their late 40s and 50s have found themselves out of work earlier than expected, they are desperate to find new sources of income to survive their golden years in Korea’s fast-aging and highly competitive society.

Because men in their 50s are often overlooked by large companies, they choose to open stores or set up their own restaurants or coffee shops by drawing on their retirement payments and bank loans.

They find retailers, guest houses and diners the easiest to set up due to the lower entry barriers. In July, the number of newly employed people in these three sectors jumped by 100,000 from the same month last year. As such, competition among retired baby boomers is already overheating.

Adding to their woes, domestic consumption is contracting, leading to poor profits.

Since opening his store in a part of southern Seoul where costs are relatively low last September, Yang’s diner has averaged monthly sales of 3.5 million won ($3,110). He said he takes home less than 2 million won after paying all his overheads, including the monthly rental fee, wages for part-time employees, power and gas bills, value-added tax (VAT), and his national pension premiums. While this doesn’t quite put him on the breadline, it is barely enough to feed a family of five, including his mother.

Yang said he has been hit by rising public utility bills, which he claims have jumped up by 30 percent recently. Hit by a record heat wave and torrential rains in August, self-employed men like him would have been the most at peril this summer, he said.

“Because of the progressive pricing system, my monthly power bill jumped to 200,000 won in August. I think it’s too much,” he said. The gas bill for the same month stood at 120,000 won.

As for the VAT, he called the government’s measuring system “unrealistic.” Under current tax law, businesses whose annual sales exceed 48 million won must pay 10 percent of their sales this way. Those with lower sales only have to pay 2 to 4 percent.

Even though owners of small businesses or stores can be eligible for certain tax breaks, Yang said the law, which was enacted in 2000, already feels draconian and out of touch.

“I find the tax standard to be too low and unrealistic, because most small businesses can’t get enough sales to get the discount,” he said. “They should be available for everyone who pulls in less than 100 million won a year.” 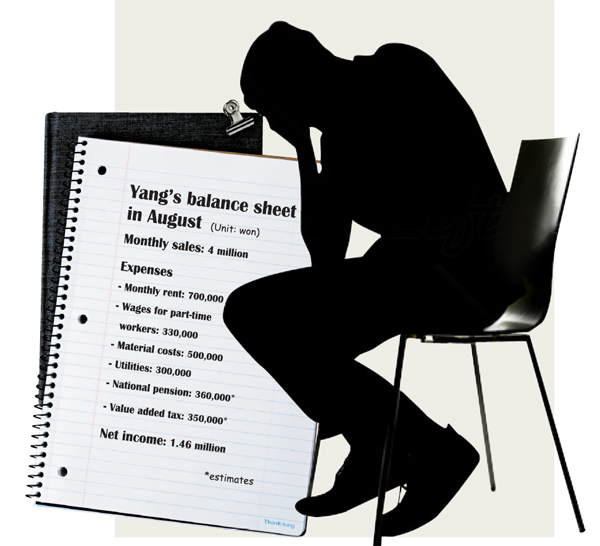 He said such burdens are discouraging small businessmen, who see their prospects of making money after all the deductions are removed as hopeless.

“A man who used to run a Korean barbecue restaurant next door got kicked out by his landlord without getting back his deposit because he couldn’t pay his monthly rent,” he said, sighing. “The situation is just getting worse.”

He estimated that less than 10 percent of self-employed men will be able to stay in business long-term. About 44 percent of the 237 self-employed businessmen who went bankrupt between January and August this year were baby boomers, the Korea Financial Telecommunications & Clearings Institute reported yesterday.

Meanwhile, the Bank of Korea said the portion of those in their 50s taking out bank loans surged to 28 percent last year from 20 percent in 2003. It added that their default rates have consistently risen. As of March, the percentage of people over 50 who default on their loans stood at 1.42 percent, compared to 0.6 percent among 30-somethings.

“The number of baby boomers who open their own businesses will peak in 2013 and 2014,” said Kim Kwang-seok, a research fellow at Hyundai Economic Research Institute. “The depressed state of domestic consumption may trigger the collapse of the middle class, leading to severe polarization and structural problems in the economy.”