Leeteuk sheds tears while talking about his past

Leeteuk sheds tears while talking about his past 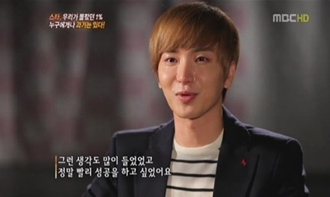 Super Junior’s leader Leeteuk showed a side of him like never before when he tapped into his serious side while talking about his childhood on MBC’s “Good Day” on Sept. 10.

Before becoming a part of the Hallyu group on the international scene, Leeteuk said that there was much hardship, especially in his family relations.
“I was beaten often and my parents fought all the time,” said the boy band member.
Leeteuk couldn’t control his tears when he revealed that from elementary school he was stressed out from the tumultuous situation at home.
“I was scared of my dad, and didn’t like him very much,” said the entertainer.

“During training too, I’d question if this was really the right thing for me. One thing I knew for sure was that I needed to become successful as soon as possible.”
Despite the pain, it seems like the idol group member has reached his dreams as his band is now synonymous with K-pop and has become the first-ever Korean group to have held a show in Paris.