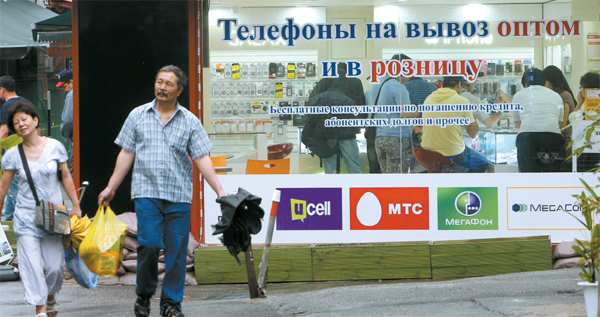 A Mongolian man walks with groceries purchased from a Mongolian grocery store in Jung District, central Seoul. Behind him is a cellular phone store catering to Uzbeks. By Kang Jung-hyun


Munkh Batto came to Korea two years ago from Mongolia to work at an industrial complex in Ansan, Gyeonggi. There’s not much in Ansan to remind Batto of home. So every weekend, the 27-year-old factory worker gets on subway line four and comes up to Little Mongolia and Central Asia in Gwanghui-dong, Jung District, central Seoul, not far from where the old Dongdaemun Stadium was located.

A reporter from the JoongAng Ilbo accompanied Batto and his friends to get a taste of Mongolia in the center of Seoul.

If you come out of exit 15 of Dongdaemun History & Culture Park Station, you can spot the 10-story Mongol Tower, easily recognized by its sign boards in Cyrillic characters. Inside there are 48 businesses catering to Mongolians and central Asians living in Korea or visiting, including travel agencies, foreign exchange kiosks and Mongolian restaurants. More such shops are in the streets around the tower.

What started as a cluster of money-changing shops used by Mongolian workers illegally residing in Korea in the late 1990s has become the biggest Mongolian town in Korea. “When I come here,” said Batto, “I feel like I am home, eating Mongolian food and chatting with friends from my country.”

Actually, the Mongolians are relative newcomers. The original foreigners in the streets around Gwanghui-dong were Russians, who arrived after relations were established between Korea and the Soviet Union and particularly after the Soviet Union collapsed. Soon Dongdaemun had Korea’s unofficial Russian Town. And although there are still Russian restaurants in the neighborhood, the Russians merchants largely left for China, only to be replaced by Central Asians and Mongolians.

“People from Uzbekistan, most of whom first came to Korea about 10 years ago, exchange information about jobs and traveling here,” said Siri, who runs a traditional Russian restaurant in the area.

According to the Ministry of Public Administration and Security, 483 Mongolian nationals reside in Jung District, accounting for over 10 percent of the total number of Mongolians in Seoul, which is 4266. The fact that Little Mongolia is right nearby is probably the reason why. Over 400 people from Central Asia also reside in the Jung district.

The foreigners tend to stick together and not mingle much with Koreans. “Many streets in the area are filthy,” said a money changer surnamed Kim working in the neighborhood, “and I don’t see many Koreans here.”

The Seoul Metropolitan Government has decided to set up what will be Seoul’s eighth global village center in the district.

“With assistance coming from the city government, the Mongolian and Central Asia area in Jung District could become a lively foreign community,” noted Jung Jeong-gil, a director of the global planning team at the city government.