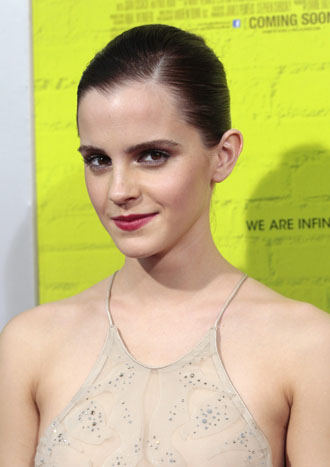 TORONTO - Emma Watson is living out another fantasy - the life of a high school kid that she missed out on growing up in the Harry Potter fold.

For her first major film role since leaving the world of Potter behind, Watson chose “The Perks of Being a Wallflower,’’ in which she plays an American teen who’s part of a clique of hip outsiders at a Pittsburgh school.

The 22-year-old British actress said it gave her a taste of a whole different life considering her cloistered upbringing on the set of the Potter franchise, in which she was cast as bookish young hero Hermione Granger at age 9.

“It felt pretty exotic to me. It really did. It was a very voyeuristic experience,’’ Watson said in an interview Sunday at the Toronto International Film Festival, where “Perks’’ played ahead of its U.S. theatrical release Sept. 21. “Getting to go to Friday night football and Olive Garden, school dances and all of that stuff. That was really another world to me.’’

She’s rich and world famous because of the eight “Harry Potter’’ films, and Watson shares Hermione’s studiousness, spending a couple of years at Brown University years before launching into a busy post-Potter film schedule.

Yet for all the worldliness that comes with her Hollywood experience, Watson said that growing up in a bubble of celebrity has left her feeling like a kid when it comes to many things.

Her work ethic is fairly grown-up, though. While attending Brown and working on last year’s “Harry Potter’’ finale, Watson squeezed in a small role in the Marilyn Monroe drama “My Week with Marilyn.’’

After “Perks,’’ she co-starred in Sofia Coppola’s 2013 release “The Bling Ring,’’ playing one of a group of celebrity-obsessed Los Angeles teens who burgle the homes of Hollywood stars.

Watson also has a cameo role in Seth Rogen’s upcoming comedy “The End of the World,’’ playing a version of herself alongside other stars coping with the apocalypse during a party at James Franco’s place.