Banking on evening calls to win over white collars

Banking on evening calls to win over white collars 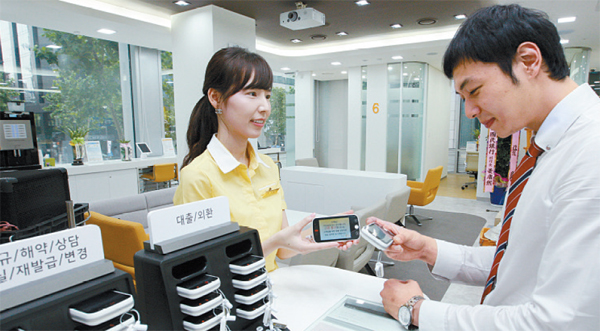 A female employee at KB Kookmin Bank’s Teheran-no branch in southern Seoul explains to a white-collar worker how he will be notified by a novelty-like gadget resembling a cell phone when his turn is called to go to the counter. The branch, which opened on Monday, operates from 12 p.m. to 7 p.m. on weekdays targeting salaried workers who cannot make time during regular banking hours before 4 p.m. Provided by the company


More local banks are delaying their opening hours at branches in busy office districts on weekdays in a bid to target salaried workers who can’t make time during the working day.

Korea Exchange Bank (KEB) broke the mold as far back as 2003 by opening branches on Sundays in areas densely filled with migrant workers, but now others are following suit and targeting regular Korean workers and consumers as they rack their brains to lure customers.

KB Kookmin Bank opened what it calls a “3040 branch” on Monday in Teheran-no, southern Seoul, where numerous financial firms and venture enterprises are located. The name “3040” refers to salaried workers in their 30s and 40s, the bank said.

“For many salaried workers, their only option is to come during their lunch hour, which is obviously very inconvenient,” said an employee at the bank.

“We plan on opening another 3040 branch in Gasan Digital Complex [in southwest Seoul] by October as it has a large population of white-collar workers.”

In addition to stands filled with newspapers and magazines, the new branch offers stations stocked with tablet PCs and laptops so people can keep working while they wait for their number to come up.

Earlier this month, Standard Chartered Korea extended the operating hours at six of its branches in crowded areas of the capital to 6 p.m. or 7 p.m., including in Yeoksam and Myeongdong.

“While our Yeoksam and Gasan Digital Complex branches target company workers, our Myeong-dong and World Trade Center branches have a large floating population,” said an employee.

“After monitoring the progress of these specialized branches until December, we will consider opening more next year.”

Meanwhile, KEB said it is looking to raise its competitiveness by continuing to tap migrant workers.

It now opens 13 branches on Sundays from 10 a.m. to 4 p.m. in areas such Daerim and Hyehwa in Seoul, Uijeongbu, Pyeongtaek, and Wongok of Gyeonggi, and Gimhae in South Gyeongsang. They are also open to Korean nationals.

“The response from migrant workers was overwhelmingly positive as they can transfer money to their families back home on their days off,” said an employee at KEB, adding that it will open more branches on weekends to cater to the growing number of foreign workers in the country.

In April, Shinhan Bank began running a branch inside Namsan State Tower, an office building that is not to be confused with N Seoul Tower, a huge tourist draw in Seoul.

Employees there are tasked with approaching white-collar workers in the same building and persuading them to open accounts with Shinhan.

“After we get them to bank with us, the next step is selling them on our credit cards and pension packages,” said a bank employee.