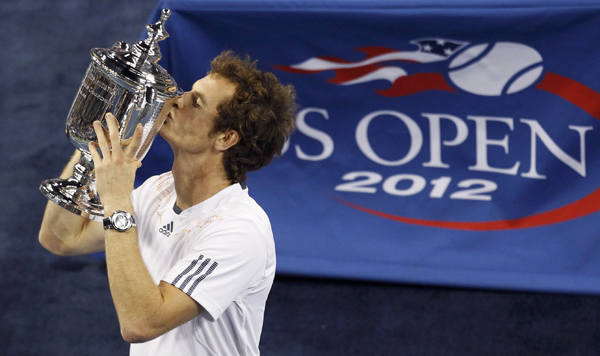 Britain’s Andy Murray kisses the trophy after defeating Serbia’s Novak Djokovic in the men’s singles final match at the U.S. Open tennis tournament in New York, Monday. It is his first Grand Slam victory and the first Grand Slam win in 76 years for Britain. [REUTERS/YONHAP]

In a roller-coaster final, which witnessed a 54-shot rally, numerous 30-stroke exchanges, as well as a record-setting tie-breaker, the 25-year-old Murray held his nerve in a knife-edge final set.

The Olympic champion led 3-0 in the decider, dropped serve but broke again for 5-2 when Djokovic called a medical time-out.

But Murray wasn’t to be denied, taking the historic crown when Djokovic went long with a forehand on a second match point in what was, at four hours and 54 minutes, the second-longest U.S. Open final in the history of the tournament.

Murray insisted it was a huge relief to finally have captured a major and put an end to the questions over whether or not he would do it.

“Most press conferences I would do I would get asked a question along those sort of lines, and it does build pressure a little bit,” he said.

“You try not to think about it much when you’re playing, but when I was serving for the match, I realized how important that moment was for British tennis. It’s something that hasn’t happened for a long time.

“And, yeah, I’m obviously proud that I managed to achieve it, and don’t have to get asked that stupid question again.”

Murray paid tribute to coach Ivan Lendl, who lost three finals in New York from 1982-84 before clinching three titles in a row from 1985-87.

“He was one of the greatest,” Murray said. “He has helped me through the tough times.”

“Any loss is a bad loss. I’m disappointed to lose the match, but in the back of my mind I knew that I gave it all. I really, really tried to fight my way back through,” said Djokovic.

“I had a great opponent today. He deserved to win this Grand Slam more than anybody because over the years he’s been a top player. He’s been so close; lost four finals. Now he has won it, so I would like to congratulate him.”

Murray had lost all of his four previous Grand Slam finals - to Roger Federer at the U.S. Open in 2008, the 2010 Australian Open and this year’s Wimbledon as well as to Djokovic in Australia in 2011.

But cheered on by fellow Scots, Sir Sean Connery and Manchester United boss Sir Alex Ferguson, he survived a thrilling fightback by Djokovic, a five-time major winner who had defeated Murray in an epic five-setter in the Australian Open semifinals in January.

Djokovic had spent five hours fewer than Murray on the court in reaching his fourth U.S. Open final, but fitness wasn’t an issue in the opening exchanges.

It was a battle to see who could master the vicious wind that suddenly whipped up inside Arthur Ashe Stadium as play got underway.

Both players were broken in the first two games before Murray nipped ahead 3-2 with a break courtesy of Djokovic’s third double fault in just three service games.

Murray went to 4-2 despite Djokovic coming out on top in a 54-shot rally.

The Serb retrieved the break for 4-4 before serving two love games going into the tie-break.

The 24-minute tie-breaker, a record for a men’s championship match at the tournament, featured a 30-shot rally and a 33-shot exchange before Murray took it on a sixth set point after a marathon 87-minute set.