Prices are tumbling on new autos

Prices are tumbling on new autos

A day after the government announced a tax cut on automobiles, carmakers are ratcheting up their marketing strategies - including additional price cuts - to get buyers into showrooms.

To stimulate the domestic economy, the government Monday announced a 5.9 trillion won ($5.2 billion) stimulus package that included cuts in the special consumption taxes on large home appliances, such as TVs, and vehicles for the rest of the year.

Different products have different levels of tax, but they will all be cut 1.5 percentage points.

The lower taxes are levied on vehicles to be delivered by the end of this year and apply to local and imported vehicles.

But some other automakers are aggressively offering further discounts to beef up sales before the year ends.

The promotion includes a rebate for people who trade in an old car for a new one. Customers who own cars that were released before 2008 can get a subsidy depending on which car they are planning to purchase, according to the group.

The world’s fifth largest auto-making group said the special incentives range from 100,000 won to 1.5 million won, depending on the model. 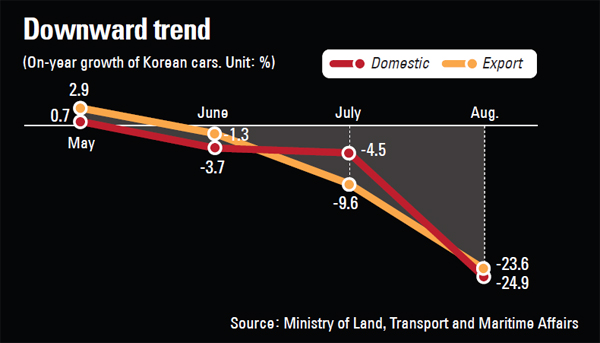 The group is trying to bounce back from sluggish sales last month.

“Along with the government stimulus package, our additional promotions will contribute to boost the domestic car market,” said a spokesman for Hyundai. “A turnaround in the car industry will help the entire economy recover.”

However, some analysts say the three automakers have already been offering special discounts and rebates for used cars throughout this year, so an extra discount program won’t be easy for them.

The local automobile market has been stalling lately. A recent labor strike contributed to falling sales. Last month a total of 96,648 vehicles were sold both in the domestic market and abroad. This is a 21.9 percent drop from a year ago. It is also the lowest monthly sales figure since January 2009.