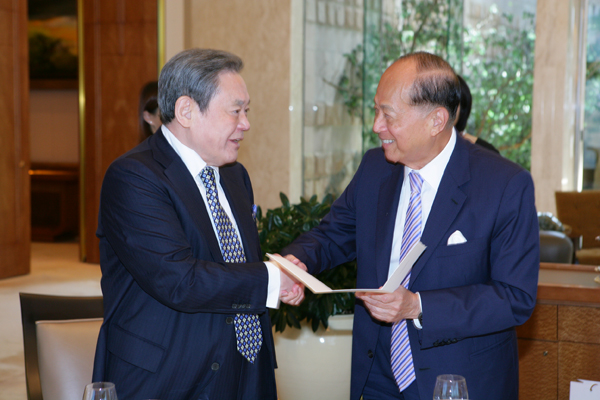 The meeting was the first between the two business icons.

“Top managers from two of Asia’s biggest business groups - Samsung and Cheung Kong - talked about each other’s matters of interest and measures of prospective cooperation based on their own strengths,” said Samsung in a press release.

Li, an 83-year-old self-made billionaire, is chairman of Cheung Kong Holdings and Hutchison Whampoa, and has an estimated wealth of $25.5 billion. Li ranked ninth among the world’s top 100 richest men last year.

Korea’s richest man Lee, 70 years old, has $8.3 billion in personal assets as of March, according to Forbes magazine.

The luncheon took place at the Cheung Kong Group headquarters in the Central business district of Hong Kong and the topics included mobile handsets, installation of long-term evolution (LTE) telecommunication networks, plants, construction and engineering, according to the release.

Lee expressed his appreciation for Samsung Electronics being chosen as the exclusive supplier of base stations for LTE networks currently being installed by H3G, a subsidiary of Hutchison Whampoa, in Britain.

Hutchison Whampoa operates a mobile carrier in Britain and through the contract Samsung got into the European LTE network market for the first time.

Samsung owns over 800 LTE standard-related patents, the most of any company.

Samsung has been preparing to use its LTE patents to its advantage in its upcoming legal scuffle against Apple.

The Korean tech firm lost its patent suit in the U.S. against the California-based company last month.

In July, Samsung C&T, a construction arm of Samsung, received a job from Hong Kong’s MTR Corporation to build the Shatin-Central Line of the city’s subway system.

With this deal as a catalyst, the two top businessmen agreed to step up cooperative efforts in fields they are strong in.

The two moguls also “exchanged in-depth opinions about measures to tackle the global economic downturn,” according to Samsung.

Until it released its press release, the Samsung Group kept secret the purpose and schedule of the chairman’s trip.