Ahn says he will decide on run after DUP primary

Ahn says he will decide on run after DUP primary 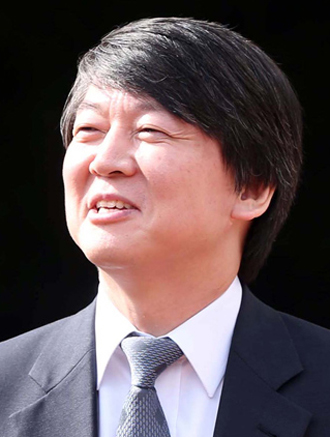 Liberal independent Ahn Cheol-soo will break his silence on whether he will run for president after the largest opposition party selects its candidate, Ahn’s spokesman said yesterday.

“Within a few days after the Democratic United Party selects its presidential candidate, Ahn will have an opportunity to announce his position on running in the presidential election,” Yoo Min-young, Ahn’s spokesman, said yesterday in a press release.

Ahn has been meeting with people from various fields, classes, generations and regions to exchange opinions with them after he published the book “Ahn Cheol-soo’s Thoughts” in July, Yoo said.

“As he has promised, the time will come for Ahn to report to the public his decision,” Yoo said.

Ahn is highly popular with liberal voters and the young, but he is not allied with any political party and refused to participate in the presidential primary of the largest liberal party, the Democratic United Party, which is scheduled to wrap on Sunday. A runoff may take place on Sept. 23 if none of the four contenders win a majority vote. Moon Jae-in, former chief of staff of the Roh Moo-hyun Blue House, is currently leading the race with 50.4 percent.

Speculation was already high that Ahn would announce his decision no later than the Chuseok holiday on Sept. 30.

The liberals were expected to unite behind a single candidate to fight the longtime front-runner Park Geun-hye of the conservative ruling Saenuri Party, but it remains to be seen what the DUP candidate will do if Ahn does run.

Ahn’s decision to break his silence on his presidential ambitions came as Moon began picking up popularity among liberal voters.

In the latest poll by Realmeter, 39.5 percent of voters said they want Moon to represent the liberals in the race, while 22.7 percent said they want Ahn as the consolidated liberal candidate. The poll was conducted on Friday and Monday, and 1,500 voters participated.

A similar outcome was shown in a recent survey conducted by the Hankyoreh. According to the poll conducted Saturday, 42.6 percent said a DUP candidate should represent the liberals, while 40.9 percent said Ahn should. Pressure has grown among the liberals for Ahn to make up his mind. The Saenuri Party also attacked him for delaying an announcement and giving little time for the public to evaluate him before voting day.

“Ahn has his own time line,” said Park Yong-jin, spokesman of the DUP. “The DUP will just do its best to win the presidency based on its own promises and plans.”

The Saenuri Party sneered at Ahn’s plan, calling him an opportunist.

“Ahn’s approach will downgrade the presidential primary of the largest opposition party, participated in by more than one million people, to a semifinal,” Saenuri Representative Kim Jae-won said. “He is trying to gain from the DUP’s loss, and that is opportunistic behavior.”

Since July, Ahn has been touring the country to communicate with the public and have meetings with influential figures in various fields. Among the experts Ahn has met are Lee Hun-jai, former deputy prime minister for economic affairs; Choi Sang-yong, honorary professor of politics at Korea University; Cho Yong-Kyung, vice chairman of Posco Engineering; and Novelist Jo Jung-rae.