Tokyo advertises its claim over Dokdo in papers

Tokyo advertises its claim over Dokdo in papers 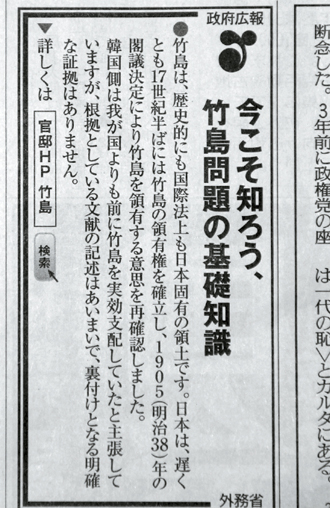 Despite efforts by the United States to cool down diplomatic tensions between Korea and Japan, the conflict over the Dokdo islets spiked yesterday after Japan renewed its claim over Korea’s easternmost islets by running advertisements in Japanese newspapers.

The Ministry of Foreign Affairs and Trade immediately protested, saying it will start publicizing its territorial rights over Dokdo and expand next year’s spending on the islets.

In the advertisements, signed by Japan’s foreign ministry and titled “Now is the time to be informed,” Japan said, “Takeshima is historically and by international law part of Japanese territory,” and, “Japan established territorial rights in the mid-17th century and reconfirmed the rights over Takeshima in 1905 after the cabinet’s approval.” Japan calls Dokdo Takeshima.

The advertisement continued: “Korea says it has been effectively controlling Takeshima even before us, but there is no clear evidence and the references are vague.”

In response, Seoul’s Foreign Ministry strongly protested, and Foreign Minister Kim Sung-hwan, who is currently on a trip to Greenland with President Lee Myung-bak, expressed regret over Japan’s move yesterday.

“Japan should make further efforts to pave the way for future-oriented bilateral relations based on a correct understanding of history,” said Cho Tai-young, spokesman of the Foreign Ministry.

Cho also confirmed that the ministry requested a big increase in next year’s budget for Dokdo.

“Japan should know well the reason why we [Korea] are seeking an increase in the Dokdo budget,” Cho said. “The government will make sure to let the world know about our stance on Dokdo.”

According to government officials, the Foreign Ministry is seeking 4.2 billion won ($3.7 million) in 2013, up 81 percent from this year. Officials say the increased budget will be primarily used to promote Korea’s stance on Dokdo overseas.

The heightened tension over the islets came after U.S. Secretary of State Hillary Clinton urged the leaders of Korea and Japan in separate meetings on the sidelines of the Asia-Pacific Economic Cooperation summit in Vladivostok, Russia, last week to “lower the temperature and work together.”

President Lee and Japanese Prime Minister Yoshihiko Noda also met briefly on the sidelines of the summit and agreed on the need to mend ties and work together.