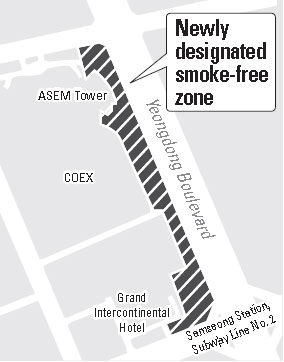 The area around COEX Convention & Exhibition Center in Samseong-dong, southern Seoul, has been designated as another smoke-free zone by the Seoul Metropolitan Government.

The Gangnam District Office said yesterday it will ban people from smoking along the 836-meter (914-yard) stretch between exit No. 5 of Samseong Station on subway line No. 2 and COEX Station, which will be completed by 2014 as part of subway line No. 9.

Sidewalks along Yeongdong Boulevard and COEX Plaza, a high-traffic pedestrian region in the city, are included in the ban.

It is the second smoke-free zone that the Gangnam District office has designated after the section of Gangnam Boulevard between exit No. 2 of Gangnam Subway Station and exit No. 5 of Sinnonhyeon Station.

The Gangnam Boulevard smoking ban was implemented in July after a three-month-long grace period.

The Gangnam office said it has decided to designate the area as a smoke-free zone because many international level events and many exhibitions that attract students and children are held at COEX.

“We will also designate all restaurants that are bigger than 150 square meters as a smoke-free zone from December,” a spokesman for the Gangnam District Office said.

“And areas at public bus stops and school zones will also be smoke-free by 2014 to promote the city as an eco-friendly city to every citizen.”

Since June, the city government has been imposing 100,000 won fines on people found smoking in 1,950 public areas including parks, children’s playgrounds, squares and bus stations in 25 districts of the capital city.

Popular public places such as Gwanghwamun, Cheonggye Stream and Seoul Plaza all located in central Seoul are under similar control.