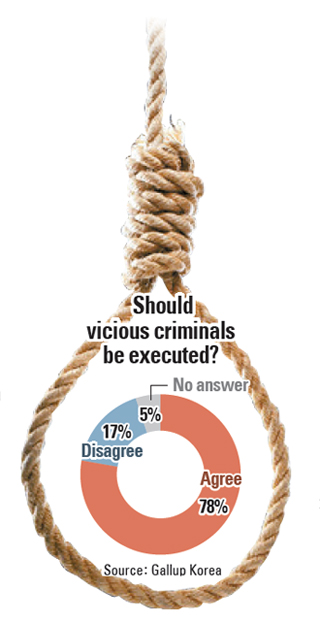 The recent spate of horrific sex crimes against women and children has reignited a sensitive debate over whether or not the country should resume the execution of criminals on death row as a deterrent to the heinous crimes.

Public outrage reached a new high after a 7-year-old girl was abducted from her home in Naju, South Jeolla, and raped by a neighbor on Aug. 30.

The gruesome incident was the latest in a series of sex crimes around the country.

Alarmed by the growing sense of public insecurity, the government announced special measures to intensify police patrols, crack down on child pornography and strengthen punishments of sex offenders, including a wider use of chemical castration.

And yet, the public demanded even further action, saying inhumane crimes must be punished with the death penalty to set an example.

As of yesterday, Korea had 58 death row inmates.

Although capital punishment still exists in the country, no execution has taken place since the Kim Dae-jung administration came into power in 1998.

Amnesty International considers Korea an abolitionist in practice, but the Constitutional Court still upheld the legality of capital punishment in 2010 when a constitutional challenge was made by one of the death row inmates.

Immediately after the brutal rape in Naju was reported by the media, society was in an uproar.

One Internet user, who identified herself as a 35-year-old mother of a 4-year-old daughter, started a petition demanding a sterner punishment of the suspect, Ko Jong-seok, and 49,970 had signed the petition as of yesterday afternoon.

The petitioner said she aims to collect 100,000 signatures before sending the appeal to the Ministry of Justice.

She also created an Internet forum where many enraged mothers from around the country posted messages demanding the government execute sexual predators.

Dozens of homemakers and women’s rights advocates gathered in Myeong-dong, central Seoul, on Sept. 2, and similar rallies followed throughout the week.

With only a few months left before the presidential election, the debate also heated up the political arena. While many in the conservative ruling Saenuri Party said that Korea should resume capital punishment to ring an alarm bell, the liberal opposition Democratic United Party argued against the death penalty, mainly citing concerns of wrongful execution.

At the annual meeting with civil servants of Gyeonggi, Gov. Kim Moon-soo said Tuesday that sterner punishment against sex crimes are needed for victims to feel a sense of justice.

“Those who committed inhumane crimes were convicted and received the death penalty,” Kim said. “But the president and the government are not actually carrying out the sentences. Whose human rights are they protecting?”

In a meeting with reporters on Sept. 4, Park Geun-hye, the presidential candidate of the conservative ruling Saenuri Party, also spoke about the issue.

“I believe capital punishment should exist in order to send a warning to a person who commits an inhumane, unacceptable, vicious crime that he or she could face the death penalty,” Park said.

“When there was a movement in Korea to abolish capital punishment, I’ve already said it should be considered carefully,” Park said. “I’ve said it’s not something that we need to abolish. I am not saying capital punishment is desirable, but I think it is necessary to give a warning that a heinous crime can be punished with the death penalty.”

The liberal Democratic United Party, however, made its opposition clear, citing the case of wrongful executions of political prisoners during the authoritarian regime of President Park Chung Hee, the late father of Saenuri Party opponent Park Geun-hye.

“There were some people who were executed because of wrongful convictions,” DUP Chairman Lee Hae-chan said Wednesday in his speech before the National Assembly.

“We all remember the People’s Revolutionary Party incident. They were later acquitted in the retrial, but the suspects had already been executed.”

Labeled as judicial murder by the liberals, the incident referred to the wrongful execution of a group of opposition politicians with socialist inclinations under the National Security Law.

The Park Chung Hee regime prosecuted dozens of individuals in 1974 on charges of attempts to reopen the People’s Revolutionary Party with an aim to overthrow the government.

The Supreme Court convicted eight of them and handed down the death penalty on April 8, 1975. Only 18 hours after the sentence was handed down, the government executed them.

In December 2005, the judiciary accepted the appeal for a retrial and acquittals were made in 2007.

“The state must educate death row inmates to repent and should pay for the necessary expenses for the correction,” DUP Chairman Lee said. “It is the state’s duty to protect one innocent lamb.”

The ruling and opposition parties further continued the debate on Thursday on whether or not the government needs to resume executions. They discussed means to prevent heinous sex crimes against children.

Lawmakers held a hearing on the issue with Justice Minister Kwon Jae-jin to talk about the issue.

Saenuri Party Representative Park Min-shik said the government spent a fortune to keep death row inmates alive in prison, while spending a fraction of the sum to support the victims of sex crimes.

“Until now, the government has spent 25.5 billion won [$22.5 million] to feed death row inmates, while spending just 100 million won to assist the victims,” Park said. “Where is the justice in this?”

He said the government only spent about 10 million won each on the victims of serial killer Yu Yeong-cheol, who murdered at least 20 people from September 2003 to July 2004.

He also pointed out that capital punishment should be carried out within six months of its confirmation at the Supreme Court, citing Article 645 of the criminal code.

“This is more than a nonbinding guideline that you can either choose to respect or ignore,” Park said. “The law said it must be implemented, but the justice ministers for years have all ignored it.”

Minister Kwon said it was regretful that the government gave the impression of having cared more for death row inmates than the victims and their families, but stressed that the expense to manage the death row inmates is a part of the necessary cost to prevent crimes and isolate them from the society.

Kwon promised that the government will put forth more effort to support the victims.

While the government remained cautious about actually carrying out the death penalty, Kwon admitted to the need to reinforce the punishment of sex crimes against children.

“I agree that we need legal grounds for stronger punishment,” Kwon said, adding that the government will seek the legislature’s help to reinforce the punishments.

As of now, the rape of a child younger than 13 years old is punishable by eight years to 12 years in prison, with a possible punitive term.

The maximum sentence the prosecutors can seek is 15 years. The public, as well as lawmakers, said the punishment is just too soft to bring justice to the victims and prevent further crimes.

Another Saenuri lawmaker Hong Moon-jong said capital punishment should be handed down to a child rapist to demonstrate the government’s intention to protect children and warn sexual predators.

He also said the judiciary, mainly composed of male judges, was too lenient on sex crimes.

“Last year alone, the judiciary handed down suspended sentences to more than 48 percent of the convicts of sex crimes whose victims were younger than 13 years old,” Hong said, criticizing the court system.

Of the 58 prisoners on death row, the longest serving inmate is Won Eon-sik, convicted of killing 15 people in 1992.

After the Supreme Court confirmed capital punishment in 1993, he has been on death row for 19 years.

Since the first execution of a convicted murderer in July 1949, a total of 920 people have been executed. The last execution took place on Dec. 30, 1997 during the Kim Young-sam administration.

DUP Representative Yoo In-tae, a former death row prisoner, said yesterday he will propose a bill next month to abolish capital punishment. Yoo, however, said he doesn’t want the party to have a formal opinion on this matter, stressing that every individual’s opinion should be respected to decide the fate of the death penalty in Korea.

Yoo yesterday shed tears as he talked about the People’s Revolutionary Party incident. “Even before the Supreme Court finalized its ruling on April 8, 1975, the authority already began preparing for the execution,” Yoo said, explaining that those executed at the time were his friends.

“They were arrested from their homes without proper explanations,” Yoo said.

“And the government didn’t allow them a single meeting with the families until they were executed.”

Yoo was convicted in 1974 for having organized an anti-state group to protest the military dictatorship of Park Chung Hee and was sentenced to death.

However, the Seoul Central District Court retried the case and acquitted him in February this year.

Experts are also divided on the debate about whether to resume the executions or not.

“Whenever I see a heinous criminal, I also personally think it is better to execute them to permanently remove them from society,” Mok Young-joon, a Constitutional Court justice, told the JoongAng Ilbo in an interview before his retirement on Sept. 14.

“My wife also speaks up whenever a heinous crime takes place, asking me why the government is keeping criminals in prison instead of executing them. But we need to think about the issue with cool-headed reason.”

Mok said Korea has become an abolitionist in practice because it hasn’t carried out an execution since 1998.

“When a law is not implemented, it causes the people to distrust law and order and not take it seriously,” Mok said.

“The death penalty is largely aimed at preventing crimes by causing extreme fear. But death row inmates are now destined to die of natural causes in prison. As of now, only five countries around the world are actually carrying out executions. We should abolish ineffective capital punishment and introduce life imprisonment without parole as an alternative.”

Others, however, differ in their opinions.

“Everyone fears death,” said Lee Young-rahn, a professor of law at Sookmyung Women’s University, stressing that it is an important tool to prevent recidivism of brutal crimes.

The government, however, appeared to have no intention to immediately resume the execution of death row inmates.