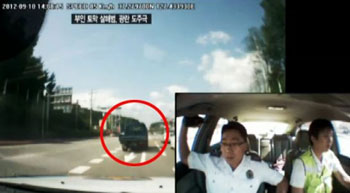 A civil servant killed his wife for coming home drunk too often, dismembered her corpse and left the pieces on a mountainside, police said.

The police said Jin killed his wife around 8 p.m. on Friday in their apartment in Geumchon-dong, cut her body up in the bathroom and left the pieces on a mountain about 5 kilometers (3.11 miles) away.

Jin called the police at 3 p.m. Sunday, two days after the killing, and reported that his wife had been missing for two days. After calling the police, Jin told two of the couple’s three children he was going out for work, and didn’t return.

Police suspected his role in his wife’s disappearance. They examined CCTV footage from his apartment and saw Jin removing three trash bags and a backpack between 4:08 a.m. and 4:13 a.m. on Saturday.

The police also found blood stains in the bathroom and at the front door of Jin’s apartment.

At 1:15 p.m. on Monday, the police saw that Jin used an ATM machine in Gwangju, Gyeonggi and eventually caught him at 2:10 p.m. in Icheon, Gyeonggi.

After being apprehended, Jin attempted suicide by drinking a bottle of agricultural chemicals he was carrying, but he recovered after his stomach was pumped at a nearby hospital.

In questioning, he initially denied killing his wife, but finally confessed, police said.

He said he and his wife had been arguing for a long time because she often went out and got drunk. “My wife came home late in the evening again and she was intoxicated,” Jin told the police. Jin said he hit her in the head with a soju bottle and killed her with a kitchen knife.

The police said Jin kept the dismembered body at home for eight hours and carried the pieces out after his children went to bed. The police said the couple’s three children are not aware of their mother’s death yet and the oldest son is doing military service.