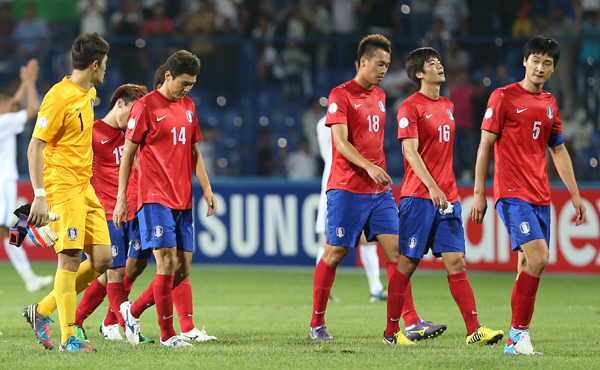 Korean national football team walks off the pitch after they were held to a 2-2 draw by Uzbekistan at Pakhtakor Stadium in Tashkent, Uzbekistan, on Tuesday. [YONHAP]


Korea came away with one point from its FIFA World Cup qualifier against Uzbekistan on Tuesday night after a lackluster 2-2 draw that left fans wondering what happened to the offensive might that tacked on seven goals against Lebanon and Qatar.

The Taegeuk Warriors remain atop Group A in the final round of the Asian qualifiers with seven points, three ahead of a sliding Iran who lost 1-0 to Lebanon on the same night of the Uzbek draw.

At the match held at the crowded 34,000-seat Pakhtakor Stadium in Tashkent, Uzbekistan, the hosts started off aggressively with a barrage of shots through a weak Korean back line. A Ki Sung-yueng own goal in the 13th minute put Korea in a hole early on.

Defender Kwak Tae-hwi put in the equalizer in the 44th with Lee Dong-gook striking in the 57th, putting the away side ahead for the first time in the match. But a sloppy defense saw the lead slip away just two minutes later with an equalizer from Sanjar Tursunov.

“The game became difficult as we failed to seize the dominance in the early phase,” Korean coach Choi Kang-hee told a press conference after the match. “When we got ahead in the game, we should have pushed the opponents stronger. I regret that.”

Korea entered the game as the favorites, having won seven of the past nine showdowns with the Central Asian country, ranked 70th place in the world by FIFA.

The Korean national team was also thought to be the strongest side put together by Choi in the qualifying stage, with many young guns from the bronze medal Olympic team joining the campaign. But chemistry was lacking as the star players failed to get into a flow, with passes often off the mark in the midfield .

Park Chu-young, a former Arsenal forward who recently moved to Spain’s Celta Vigo, was substituted in as a left-wing midfielder in the 72nd minute for a set piece with veteran striker Lee Dong-gook, a duo that coach Choi wants to take advantage of more in future qualifiers.

There were few direct passes between the two and Lee, a Jeonbuk Motors forward, focused on touches with fellow K-League players like Kim Shin-wook of the Ulsan Tigers, while Park bid to create his own chances with Olympic teammates Kim Bo-kyung of Cardiff City and Ki of Swansea City.

After the game, Lee was apologetic to Lee Keun-ho, not to Park, saying he blew many goal-scoring chances created by the Tigers midfielder, who was replaced by Park. In the 16th minute, Lee Dong-gook connected on a cross from Lee Keun-ho with his left foot, but sent the ball soaring over the crossbar despite time and space.

Lee Dong-gook, 33, partly attributed his shaky ball control to the slippery conditions and tough defense by the Uzbek players. “I will prepare more for the upcoming games,” the Motors striker said.

The combination of Ki and Lee Chung-yong of Bolton, who showed great chemistry while playing together for FC Seoul, also boosted the expectations of the Choi squad. But Lee, who has been absent due to injury, was rusty and failed to bring his trademark sharp passing and ball control.

Lee was replaced by Kim in the 54th minute.

Ki offset his own goal blunder with a cross that led to Kwak’s equalizer before the first half ended, but he struggled during much of the game, which he later called “amateurish.”

The back line posed many questions with Ko Yo-han of FC Seoul and Park Joo-ho of Basel allowing several goal scoring chances, many on set pieces, for Uzbekistan.

Ko, 24, and Park, 25, are Choi’s choices to foster a younger defense pool that could fill the void left by veterans Lee Young-pyo and Cha Doo-ri, and it appeared that it will take more games for those young defenders to find confidence. Park had a contribution on offense, though, as his cross led to Lee’s go-ahead goal.

“I got the players prepared for set pieces on offense, but today’s game leaves some regrets,” coach Choi said.

Korea has five games left in the qualification stage and eight more points from them (two wins and two draws) would likely earn the team one of the two berths from the Group A to the World Cup, although that may be insufficient for a frontrunner finish.

Three of the remaining matches will be held in Korea with the next game against Iran slated for Oct. 17 in Tehran.