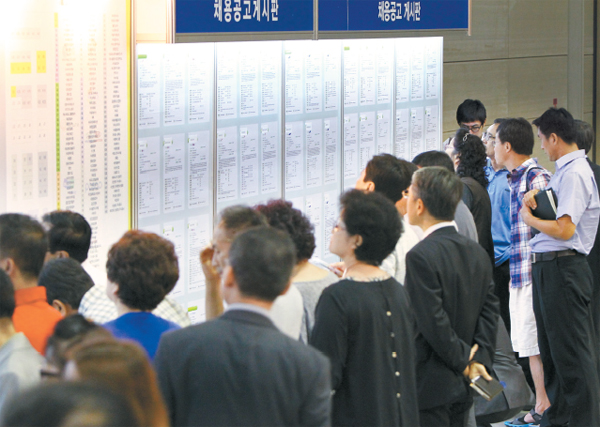 Job seekers look at a long list of openings at a job fair for baby boomers at Kintex, Gyeonggi, yesterday. Nine conglomerates including Samsung, Hyundai Motor and SK Group took part, along with SMEs. [YONHAP]


Korea’s jobless rate edged down in August from a month earlier, but job creation slowed markedly amid worries that economic conditions are toughening both at home and abroad, a government report showed yesterday.

According to the report by Statistics Korea, the jobless rate stood at 3 percent last month, down from 3.1 percent tallied in the previous month. This is the lowest level this year.

But the number of new positions also dipped. About 364,000 more jobs were created last month than a year earlier, the slowest pave of growth since September last year and significantly below July’s figure of 470,000.

“The risk to the labor market is that the size of the economically-inactive population seems to be increasing, as many people are giving up their job searches in the face of toughening employment conditions,” said Jin Eun-jung, an economist at Korea Investment & Securities.

“What is important is how many jobs the private sector intends to create at a time when businesses remain concerned about bleak market outlooks,” she added.

The size of the “economically inactive” population, who are not counted as jobless, stood at 16.04 million in August, up 1.1 percent from a year earlier, according to the report.

Labor market conditions for young people remain bleak, although their unemployment rate dropped from a month earlier. Of those aged 15 to 29, 6.4 percent were jobless last month, down from 7.3 percent in July.

The latest employment data come as the domestic economy faces continued risks from the protracted euro zone and a global slowdown, both of which could dampen growth by undercutting exports.

Central bank data showed that the country’s GDP grew 0.3 percent during the April-June period. This is less than half of the 0.9 percent on-quarter expansion tallied in the first quarter, and the slowest growth since the fourth quarter of 2011.

Exports in the first eight months of the year fell 1.5 percent from the same period in 2011, with outbound shipments shrinking 6.2 percent in August alone. 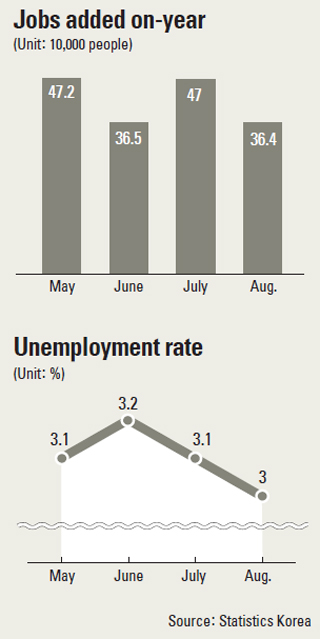 The government believes the economy will grow around 3 percent this year, but many are skeptical it will reach this level due to sluggish exports.

In a bid to prop up the economy, Seoul recently unveiled 5.9 trillion won ($5.2 billion) worth of economic stimulus measures composed of tax cuts and other efforts intended to bolster domestic demand. This is in addition to an 8.5 trillion won stimulus package unveiled in June.

A official at the Ministry of Strategy and Finance said job creation in August was “better than expected” given the current economic conditions, forecasting that overall employment would improve for some time.

But he also expressed concern that the pace of job creation could remain unstable for several months, and start to slow from October due in part to the base effect of a spike in jobs late last year.