Sept. 20 : The hotel will host a “Midnight in Paris” party in the Paris Grill, its 1930s brasserie-style restaurant.

From Sept. 28 to Oct. 7 : Three Chuseok packages are offered.

Each include use of the indoor swimming pool, recreation center and sauna.

For breakfast, there will be traditional Korean rice cookies and Songpyeon rice cake (a holiday traditional treat).

The “Chuseok & Wine Package” provides a night in a deluxe room, a breakfast buffet at the Cafe Elysee for two and a wine set. 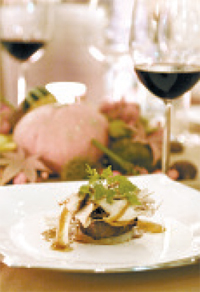 Until Oct. 31: Il Ponte, Millennium Seoul Hilton’s Italian trattoria, will host a five-course promotion featuring the ingredients of fungi and chestnuts during October.

The restaurant’s Chef Bidini will prepare dishes that include marinated champignon and porcini mushrooms with shrimp and calamari, potato dumplings with black poplar mushrooms and many more.

The promotion is available for both lunch and dinner at prices starting at 69,000 won, excluding tax and service charges.

Priced at 199,000 won, the Autumn Ladies Package I consists of a night in a three-bedroom Grand suite unit.

Priced at 219,000 won, the Autumn Ladies Package II offers a night in a four-bedroom Grand Suite.

The packages include wine, beer, light snacks and a balloon decoration. The the swimming pool and gym are also available.

All prices exclude tax and service charges. Reservations are required.

Ongoing: The Imperial Palace Seoul presents its “Anniversary Package,” which offers 23 rooms at a 75 percent discount to mark its 23rd anniversary.

Two special care vouchers from the aesthetic brand Aippo are provided with the package, as well.

Until Oct. 31: The hotel’s Japanese restaurant Murasaki is offering a kaiseki set, or a progression of courses with seasonal ingredients, featuring ocean sunfish and sea robin for the price of 130,000 won, excluding tax and service charge.

This promotion will be prepared by the new kaiseki master chef Kan Taketoshi.