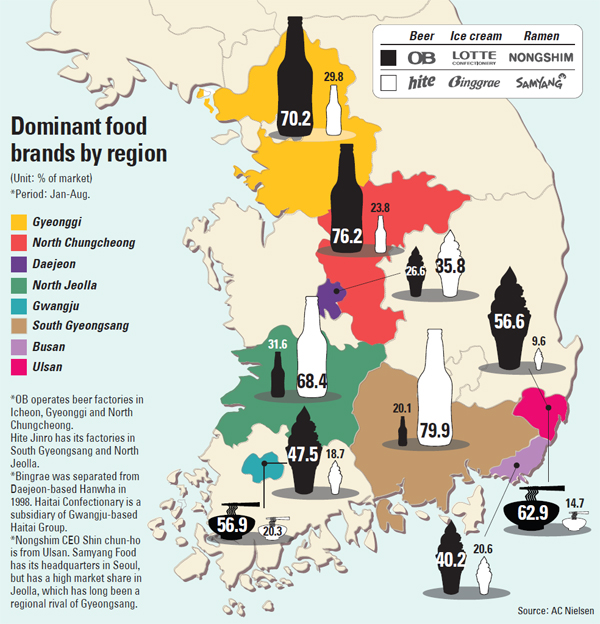 Regionalism seems to have affected sales of ramen, ice cream and beer in the first six months of the year, market research shows.

According to a survey by ACNielsen, a global marketing research firm, on the sales of beers bought by households, metropolitan areas preferred those made by OB, Hite Jinro dominated in both Yeongnam, which refers to two provinces in the southeast part of the country, and Honam, or those provinces in the southwest.

OB, the flagship beer of Oriental Brewery, controlled the market in North Chungcheong, with a 76.2 percent share, and Gyeonggi, with 70.2 percent. But beers made by its chief rival Hite Jinro ruled the roost in both South Gyeongsang (79.9 percent) and North Jeolla (68.4 percent).

Oriental Brewery operates beer factories in those regions, as well as in Gwangju in the south. It has been considered a local business in North Chungcheong since last year, when it relocated its headquarters there.

Similarly, Hite Jinro has factories in the two provinces where it brooks no challenge in the market. It first gained a foothold in South Gyeongsang in 1977, when it acquired Handok Beer’s factory in the coastal city of Masan.

“When a production plant is based in a specific region, the local people usually think that purchasing those products will contribute to regional wealth,” said an employee at Hite Jinro.

Additionally, ice cream sales in major cities appear to have been affected by which professional baseball team calls that city home, the chief reason being that huge conglomerates both sponsor the teams and own subsidiaries that deal in confectionaries. There are currently eight teams in the single-league Korean Baseball Organization.

According to a nationwide survey of ice cream sales by Lotte Mart from January to August, Bingrae controls the market in Daejeon, with a 35.8 percent share. Bingrae, the nation’s second-largest confectionery supplier after Lotte Confectionery, used to sponsor the Hanwha Eagles, which are based in Daejeon, before the company separated from Hanwha Group in 1998.

Meanwhile, Haitai Confectionery & Foods still has a fairly firm grip on the market in Gwangju, or 22 percent, despite having separated from the city’s professional baseball team over a decade ago. It owned the Haitai Tigers, now Kia Tigers, from 1982 and 2001. Haitai Group founder Park Byung-kyu also calls Gwangju his hometown.

In the ramen market, distinctive local tastes have also surfaced. According to a report by AC Nielsen, the Samyang brand has a strong presence in Gwangju (20.8 percent), and South (20.3 percent) and North Jeolla (18.7 percent), but rival Nongshim remains the national No. 1.

As Nongshim CEO Shin Chun-ho hails from Ulsan adjacent to Gyeongsang, the company has long been recharged as native to the Gyeongsang region. And Samyang seems to be benefitting from the province’s regional rivalry with Jeolla.

“The popularity of ramen products differs greatly by region, according to different food cultures and tastes,” said Lee Jung-hee, who manages the food culture department at Nongshim, suggesting a different reason for the regional preferences beyond brand names and loyalty.