Park haunted by her father’s legacy

Park haunted by her father’s legacy 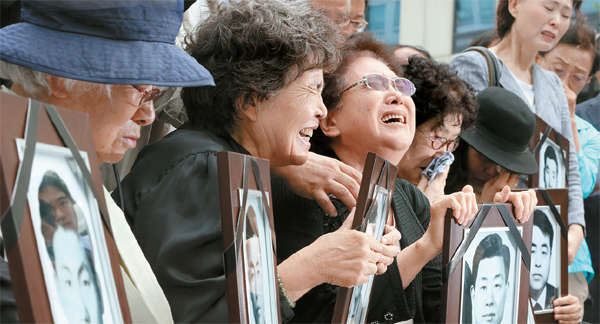 Families of the victims of the People’s Revolutionary Party Incident hold a press conference yesterday in front of the Saenuri Party headquarters in Yeouido, western Seoul, to condemn Park for “denying the judiciary, killing the victims of judicial murder once again.” [YONHAP]


The conflicted legacy of Park Chung Hee has emerged as the biggest obstacle to his daughter Park Geun-hye’s presidential ambition as the liberal opposition and the public increasingly question her view of her father’s rule.

The Saenuri Party was clearly in a panic over the issue yesterday. While a party spokesman issued an apology, saying Park had spoken poorly about the wrongful execution of political prisoners during her father’s authoritarian rule, Park’s spokesman dismissed the efforts to salvage her campaign from the liberals’ attacks.

“We admit that her expressions contained the possibility for some misunderstanding and apologize,” Representative Hong Il-pyo, spokesman of the Saenuri Party, said yesterday. “We are also paying attention to the criticism that her remarks on history are not up to the mark.”

Although Hong said Park knew that the party was making the announcement, Park’s spokesman, Representative Lee Sang-il, quickly dismissed it. “It may be Hong’s private opinion, but he spoke without consulting her,” Lee said. “She had no idea about the announcement.”

Another Park aide said she was still mulling over how to handle the situation, but Hong appeared to have acted prematurely. The ruling party’s confusion came after Park was bombarded by liberals for defending her father’s conflicted legacy, particularly the People’s Revolutionary Party incident, in a media interview earlier this week.

In an interview with MBC radio on Monday, Park said, “There are still debates and different opinions,” and “it should be left for history to judge.”

“My father used to say ‘Spit on my grave,’ and he constantly worried about the country,” she said. “I think that says it all.”

Park Chung Hee is one of the most controversial leaders in Korea. Many conservatives praise him for Korea’s modernization and industrialization, while liberals criticize him for his dictatorship and anti-democratic rule.

Park had previously defended her father’s rule from 1961 to 1979 including the May 16, 1961 coup through which he rose to power and the constitutional amendment in 1972 to extend his rule. She also reacted sensitively to the question as to if she is willing to apologize to the victims of the People’s Revolutionary Party incident, giving a response that later triggered a barrage of criticism.

“The Supreme Court had two different rulings on the case,” she said. “I’ve also said in the past that it should be left to be judged after more time has passed.” 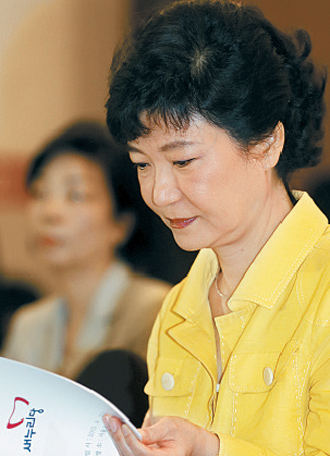 The People’s Revolutionary Party incident refers to the execution of a group of opposition politicians with socialist inclinations under the National Security Law during the Park Chung Hee regime. Dozens of individuals were prosecuted in 1974 on charges of attempting to restart the People’s Revolutionary Party with an aim to overthrow the government.

The Supreme Court convicted eight of them and handed down the death penalty on April 8, 1975. Only 18 hours after the sentence was announced, the government executed them. In December 2005, the judiciary accepted the appeal for a retrial and acquittals were made in 2007.

After her remarks prompted public outrage, Park changed her position on Tuesday. She said she respects the retrial’s ruling and accepts the legal process.

The Democratic United Party, however, wasted no time bombarding Park. As many of its leaders were former activists who fought against her father’s rule, they highlighted their firsthand experience with the case.

“The People’s Revolutionary Party incident is not a simple event that merely took place in the past,” DUP Chairman Lee Hae-chan said during the party leadership meeting yesterday. “It is a problem that is still alive.”

Lee, who was also imprisoned at the time over a national security case linked to the People’s Revolutionary Party incident, said an inmate in a cell next to him was executed without knowing his charges.

“The victims were executed without fair trials,” Lee said. “It was intolerable and unconstitutional and that was precisely why the court handed down acquittals. And yet, Park still made unacceptable remarks on this issue.”

Lee also pressured Park to make public her position about the incident because she is the presidential candidate of the ruling party. Other DUP leaders also joined the attacks. “[The Park Chung Hee regime] executed the eight people only one day after the Supreme Court ruling,” said Representative Lee Jong-kul. “And the executions took place when Park was the acting first lady of the country.”

Representative Woo Sang-ho said Park appeared to lack the courage to lead the country because she was strategically avoiding the issue. Representative Kim Han-gill said the voters will give her their conclusion when they cast ballots on Dec. 19.

Moon Jae-in, the presidential frontrunner of the DUP primary, also criticized Park. “Unless she changes her view on history, she is not qualified to be president of the Republic of Korea,” he said during the party’s primary in Daegu.

The families of the victims of the wrongful executions also held a press conference yesterday in front of the Saenuri Party to condemn Park.

They also issued a statement to criticize her for “denying the judiciary, killing the victims of judicial murder once again and insulting their families who lived painful lives.”

Questioning the genuineness of her past apologies to the victims, they also said, “She is just a daughter of a dictator. She is not appropriate as a presidential candidate.”

In an apparent indication of her campaign’s efforts to calm the situation, Park skipped a planned attendance of the National Assembly’s Strategy and Finance Committee meeting yesterday morning. Reporters waited outside the committee conference room, but a Saenuri Party official said she wouldn’t attend the session because she had to join another private meeting.

Her chief of staff, Representative Choi Kyung-hwan, and the Saenuri floor leader Representative Lee Hahn-koo were also no-shows for the committee meeting.

Later in the afternoon, Park attended a workshop for the heads of the party chapters, but refused to address the issue.

While Park remained silent about the controversy yesterday, the Saenuri Party issued an apology over her remarks, fueling speculation that she would possibly revise her stance for her campaign. After the Saenuri Party elected the 60-year-old daughter of the late president as its candidate for the December election, the conflicted legacy of her father was destined to become a test for her.

It remains to be seen how the Park campaign will counter the controversy.

Kim Chong-in, one of Park’s chief campaign managers, said yesterday it is desirable for her to put more efforts toward resolving the issue. “I always thought she should work more to overcome the past,” Kim said in an interview with MBC radio yesterday. “But because they are father and daughter, it appears to be hard for her to change her views.”

Others, however, complained that the liberals were picking an unreasonable fight. “Why does a daughter have to answer for her father’s position?” the Saenuri floor leader Lee said Tuesday. “Isn’t this guilt by association?”