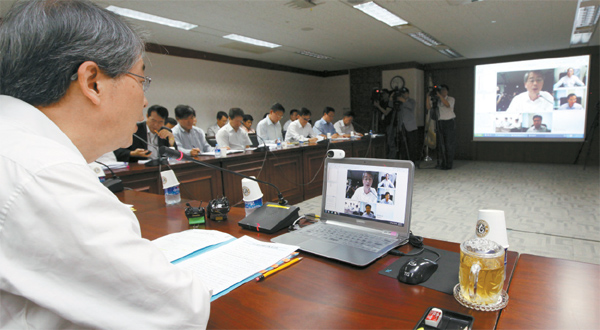 Senior officials of the Prime Minister’s Office in Seoul yesterday carry out a video conference meeting with others already in the newly built Sejong City, an administrative hub.[YONHAP]


Two days before the Prime Minister’s Office begins relocating itself to Sejong City, its senior officials in Seoul yesterday carried out a video conference meeting with others already in the newly built administrative hub.

The try-out was to make sure that there is no communication problem in carrying out government affairs once the office moves into the new city.

“We’re holding a video conference meeting. What do you think of the screen conditions?” asked Yim Jong-ryong, minister of the Prime Minister’s Office, yesterday.

He was conversing face-to-face with Yang Hong-seok, one of the office’s director-generals, via a large video screen. Yang answered, “I can see [you] very clearly.”

“To ensure administrative efficiency following the separation of government ministries, we should actively utilize video conference calls,” Yim said. “We should continue to expand facilities and investment so that ministries are able to hold video conferences and the Prime Minister’s Office should take a leading role in creating such an environment.”

Yesterday’s video conference call practice was held two days before the Prime Minister’s Office is scheduled to begin moving into Sejong City on Friday, being the first to do so.

The new administrative city, located some 150 kilometers (93 miles) south of Seoul in South Chungcheong, officially became a “special autonomous city” in July and will be home to 16 central government offices and 20 subsidiary organizations by 2014.

The city also elected its first mayor, education office head and a legislative representative during the by-elections in April.

The city’s mayor is Yu Han-sik of the Liberty Forward Party, its representative lawmaker is Lee Hae-chan of the Democratic United Party and its superintendent is Shin Jeong-gyun, who spent more than 40 years as a teacher.

The Sejong City project was introduced by former President Roh Moo-hyun in 2002 with the aim to promote balanced regional development and ease overpopulation in Seoul and nearby metropolitan regions.

More than 10,000 government officials are expected to move into Sejong City in stages.

Following the Prime Minister’s Office, which will start relocating this Friday and begin working in the new city on Monday, the ministries of finance, agriculture, environment and land, as well as the Fair Trade Commission, will follow this year.