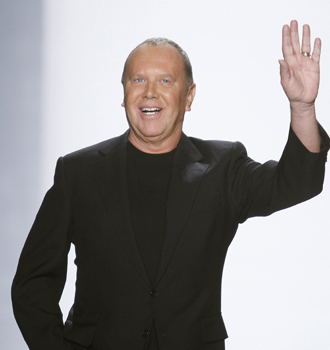 NEW YORK - A self-avowedly optimistic Michael Kors embraced bold colors in a big way Wednesday with a Fashion Week show filled with blues, greens, reds and the whitest of whites.

With film star couple Michael Douglas and Catherine Zeta-Jones among his front-row guests at Lincoln Center, Kors sent out women’s and men’s ranges for spring-summer 2012 with classic lines and minimal detailing.

“Optimistic,” Kors said backstage, summing up the mood of his collection. He was more forthcoming on his Twitter account: “Graphic stripes, bold shades and geometric glamor ... Bold shades of sun, palm and sky.”

Opening the show was a red-and-blue nautical striped bodysuit with an over-the-knee skirt provocatively slit up the front.

One dark leather dress was perforated throughout with eyelets, in a way that came across as sophisticated rather than punk-rockish.

Top model Karlie Kloss elegantly closed the show in a geometrically cut black gown likely to be seen again on a red carpet during showbiz award season. The Kors show is one of the biggest attractions at New York Fashion Week, which ended yesterday.

For those who couldn’t attend, the 53-year-old American designer made the most of Internet technology to bring them inside.

Not only did his corporate Web site stream the show live, but Kors also let a roaming camera follow him backstage, revealing his preshow jitters as he mingled with models and stylists. “Optimistic. Glamor,” read a handwritten poster backstage to inspire the models. “You are bold, confident and exude chic. Walk straight and strong, and remember you are the envy of everyone in the room. Have a great show!”

Kors has a lot of reasons to feel upbeat, having grown the brand overseas and seen the value of his 30-year-old company double after its listing on the New York stock exchange in December 2011. Other designers showing in New York on Wednesday included J. Mendel, Anna Sui and Vivienne Tam. Thursday featured Ralph Lauren and Calvin Klein.