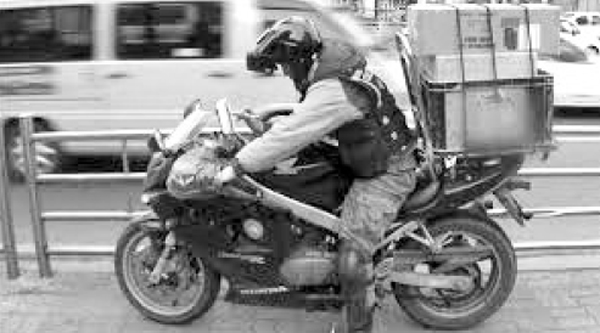 The Seosomun neighborhood in downtown Seoul is a concrete jungle with hundreds of office buildings. Deliverymen on scooters and motorcycles frequently weave their way through the traffic. But when the roads are jam-packed, these drivers often dash to the sidewalks. Sometimes when walking down a street in the business district you’ll run into three scooters at a time, each frantically jetting around you. Driving on the sidewalks, believe it or not, is illegal. When a deliveryman is caught while weaving through the sidewalk, the violator is subject to a fine of 40,000 won ($35).

One time, I saw a police car pulled over while scooters zoomed past on the sidewalk. But the policeman did not even step out of the car. I knocked on the window and asked, “Isn’t that a traffic violation?” “Well, it is, but it is hard to catch them,” he reluctantly responded. Last month, the police began a special patrol on two-wheeled vehicles on sidewalks. However, in the Seosomun area, I have not yet seen traffic cops controlling this traffic. No matter how great a policy may sound, when it is hard to enforce in the field, it has no effect. The same goes for the smoking ban in downtown Seoul. Some districts assigned officers to exclusively crack down on smokers on the streets, but strict measures are not enforced.

So when an offender is caught in the occasional crackdown, he or she protests and argues why others are not being penalized as well. Those who are caught feel that they were just unlucky. So the policy’s objective is not attained.

But the government is still pouring out policies with dubious efficiency and fairness. The Ministry of Health and Welfare announced a ban on drinking within universities and colleges. And the city, county and district offices are responsible for the implementation. It is doubtful that the civil servants at district offices will be able to patrol the university campuses and control drinking.

The Ministry of Land, Transport and Maritime Affairs is requiring seat belts in all taxis from Nov. 24. And the police and local civil servants are responsible for enforcing the policy. Civil servants have been assigned an additional task, and the effect of the policy is also doubtful. It may be easy to check if the driver and the front-seat passenger are wearing seat belts. But to check the backseats, you have to stop the car and look inside. Just like a crackdown against drunk drivers, the police would have to set up a checkpoint and stop every car. The task would require time and manpower.

However, the government has not made any plans to hire more policemen or civil servants. The existing workforce needs to handle all additional jobs. The government needs to provide methods and means to accomplish its goals. Who will carry out the policies if officers are ordered to enforce policies without any assistance?

* The author is the deputy national news editor of the JoongAng Ilbo.