The Seoul Metropolitan Police Agency said yesterday they have charged 14 teachers for medical insurance fraud and informed 17 people who may have conspired with the teachers, such as doctors and insurance agencies, that they are being investigated.

One example of the fraud, according to the police, involved a 32-year-old teacher surnamed Yoon, who allegedly entered a hospital in Gwangan-dong, Busan, as soon as the winter vacation started last year for neck and shoulder pain. She told doctors that she developed muscle pain because she wrote too many things on the blackboard in class. 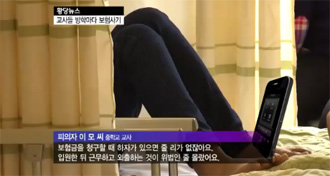 The hospital’s medical records showed that Yoon was hospitalized from Dec. 30, 2011 to Jan. 21 this year, or for 23 days. Yoon had 11 accident insurance policies and received 7.8 million won ($6,910) from insurance companies.

Her sickbed, however, was allegedly empty for more than 20 of those 23 days because she was in a training program for teachers during the vacation. The police said Yoon allegedly raked in a total of 41 million won from insurance companies after faking hospitalizations over 110 days during the 2010 and 2011 vacation seasons.

The police charged Yoon without detention for insurance fraud. The other 13 teachers allegedly used similar methods to defraud the insurance companies. Police said seven of the teachers are from public schools, four are from private schools and the rest are part-time teachers. According to the police, the 14 teachers received a total of 230 million won from insurance companies. Each of them owned three to 16 different insurance policies.

A 41-year-old middle school teacher surnamed Cho in Gwangju went into the hospital last December saying her legs were injured while snowboarding and stayed at the hospital for 60 days for treatments. She received 6 million won from insurance companies. But Cho didn’t stay at the hospital. The police said Cho was having fun at a ski resort during the hospitalization period and her cell phone signal was detected several times at Muju ski resort in North Jeolla.

The police also opened investigations on 17 more people who may have helped the teachers defraud the insurance companies. The police said a 39-year-old insurance agent surnamed Jeong aggressively recommended teachers to buy more insurance. Doctors, including a 46-year-old surnamed Choi, are being investigated for allegedly overlooking the frauds.

“We will inform schools and the local education offices of the teachers’ involvement in the frauds,” a police spokesman told the JoongAng Ilbo. “We will also let insurance companies try to get their money from the teachers.”