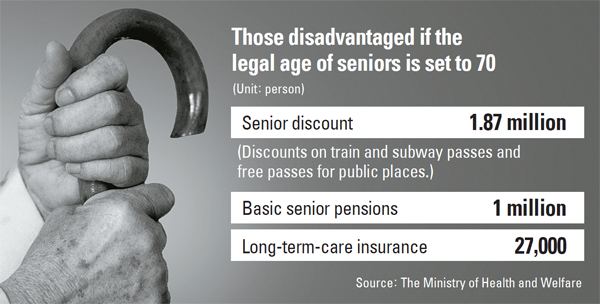 Today’s elderly live longer and are healthier and more active than ever. But age may be even more relative for the elderly as the Ministry of Strategy and Finance proposed Tuesday raising the legal age of senior citizens - currently defined as 65 and over - by as many as 10 years.

The general public however fears that a rise in the legal age of seniors will bring about an onslaught of confusion and uncertainty, especially for those retired elderly people who will be stuck in limbo without a senior pension and other perks after retirement.

The ministry suggested raising the age of designated senior citizens to at least 70 and as high as 75 as a part of its proposal to “maintain the optimum population by 2060 for the future of Korea.”

With the population of senior citizens on the rise, the government estimates that if things continue the way they have been going, Korea will be classified as an aged society in five years and, by 2026, 20 percent of the population will be seniors over 65. By 2060, four in 10 people will be seniors 65 and over.

But should the legal age of seniors be raised, the senior population is expected to decrease by at least 10 percent. As senior citizens enjoy longer lives and better health, eight in 10 responded that they considered the standard of “senior” as those older than 70 in a survey of some 11,000 elderly people conducted by the Ministry of Health and Welfare.

The average life expectancy was 80.7 years in 2011. Women live on average up to 84 years, seven years longer than men. Likewise, the average health expectancy age was 71.3 years old.

Yet, should the government redefine the legal age of seniors to be 70, or even 75, elderly people who are not at the new cutoff age will lose out on senior welfare programs, which include free subway access and other public facility passes, senior pensions, access to senior-targeted jobs, and other perks.

The Health Ministry indicates this would include some 1.87 million people deprived of senior discounts and another million of basic senior pensions.

Koreans usually retire by 60. In the private sector, the average retirement age is 57, according to the Economic and Social Development Commission.

A Health Ministry senior policy official said, “For the government to raise the age of senior citizens will require a serious discussion with society.”

But the Finance Ministry indicated that “it is carefully taking into account the health and income of the beneficiaries of the standard senior citizen age” as it reviews the proposal and plans to adjust welfare benefits depending on factors including property, wealth and health.

It also is reviewing extending the standard retirement age, or getting rid of it all together, and expanding hiring policies for seniors. If that proposal is agreed upon, “the transition will take place gradually.”

In 2011, only three out of 10 senior citizens were employed, according to Statistics Korea.

The Finance Ministry said it will reveal its follow-up population strategy report, including its proposal to raise the senior age, next month.