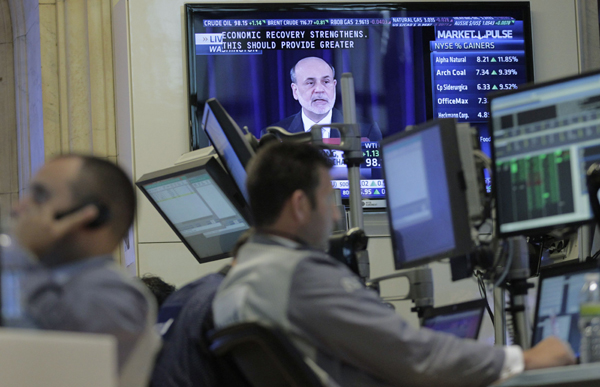 
Ben S. Bernanke for the first time pledged that the Federal Reserve will buy bonds until the economy gets closer to his goals, cementing his place as the Fed’s most innovative chairman and signaling that the battle against unemployment eclipses any concerns about inflation for now.

The U.S. central bank on Thursday announced its third round of large-scale asset purchases since 2008, with the difference that it didn’t set any limit on the ultimate amount it would buy or the duration of the program. Instead, Bernanke said stimulus will be expanded until the Fed sees “sustained improvement” in the labor market.

Bernanke is “going to fight and fight until he sees a real improvement in the economy,” said Ethan Harris, co-head of global economics research at Bank of America in New York. “He’s not going to let his critics stop him. He believes quantitative easing can help the economy and the Fed can avoid inflation, so he’ll just keep at it until there’s a real turn in the economy.”

Stocks rallied, sending benchmark indexes to the highest levels since 2007, and gold climbed after the Fed announced it would buy $40 billion of mortgage debt a month. The central bank also extended the prospect of near-zero interest rates until mid-2015 and said policy will stay accommodative “for a considerable time” even after the economy strengthens.

“This is a Main Street policy, because what we’re about here is trying to get jobs going,” Bernanke said at a news conference this week in Washington. “We’re trying to create more employment. We’re trying to meet our maximum employment mandate, so that’s the objective.”

Harris, a former researcher at the Federal Reserve Bank of New York, said he expects the Fed to continue buying bonds until the unemployment rate, which was 8.1 percent in August, declines to 7 percent. The rate has been stuck above 8 percent since February 2009, when the nation was still mired in a recession.

When the Fed’s current program to swap short-term Treasuries with longer-term securities expires at the end of the year, the central bank will also start outright purchases of U.S. government debt, according to Harris, the author of “Ben Bernanke’s Fed: The Federal Reserve After Greenspan.”

Bernanke said he isn’t worried about the economy “overheating any time soon” and that the Fed has delivered on its mandate of price stability since the mid-1990s. Central bankers can use communication tools like the interest-rate guidance into 2015 to ease policy because they have “considerable credibility,” he said.

“As he himself said, the Fed has built up a lot of capital with respect to inflation credibility,” said Soss, a former New York Fed economist. “The point of having capital is, from time to time, to spend it.”

Marvin Goodfriend, a former policy adviser at the Richmond Fed, said Bernanke, who has been chairman since 2006, is benefiting from the credibility established by his predecessors, Alan Greenspan and Paul Volcker.

Greenspan solidified his reputation for fighting inflation by raising rates by a total of 3 percentage points between February 1994 and February 1995, which later allowed him to let the unemployment rate decline to 4 percent in 2000 while inflation climbed to 2.4 percent, Goodfriend said.

Bernanke and his colleagues are “presuming their credibility for low inflation which is, I think, far from proven,” said Goodfriend, an economics professor at Carnegie Mellon University’s Tepper School of Business in Pittsburgh. The recent announcement may also signal that “the Fed is willing to risk higher inflation expectations and is even willing to tolerate it.”

Inflation expectations climbed on Thursday to their highest level since May 2011, as measured by the break-even rate for five-year Treasury Inflation Protected Securities.

The rate rose to 2.21 percentage points from 1.92 points on Aug. 30, the day before Bernanke signaled in Jackson Hole, Wyoming, that he might add to his stimulus. The rate, a yield difference between the inflation-linked debt and comparable maturity Treasuries, is a measure of the outlook for consumer prices over the life of the securities.

“The Fed is overly confident about its ability to pick the right time to withdraw all this stimulus,” Representative Kevin Brady, a Texas Republican who is vice chairman of the Joint Economic Committee, said in an interview. “Controlling the fire of inflation once it is roaring is a difficult task.”

Bernanke said at the press conference that the Fed doesn’t take politics into account when making policy decisions, and that he doesn’t “have any decision or any information” on a possible third term. Obama, who reappointed Bernanke in 2010, hasn’t said whether he would ask him to stay.

Bernanke, a scholar of the Great Depression, has deployed the most aggressive monetary policies since the Fed’s founding nearly a century ago as he battled the 2007-2009 financial crisis, helped pull the nation out of the worst recession since the 1930s and then sought to keep the expansion going.

The 58-year-old former Princeton University professor has kept interest rates near zero since December 2008 and expanded the Fed’s balance sheet to a record of almost $3 trillion with large-scale asset purchases.

The second round, announced in November 2010 and dubbed QE2, unleashed the harshest political criticism of the U.S. central bank in three decades, with Republicans warning the measure risked inflation and weakening the U.S. dollar.