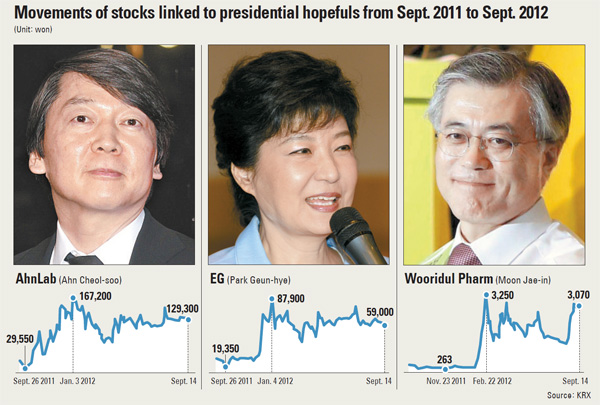 With 95 days remaining until the presidential election on Dec. 19, politically-themed stocks are continuing to rally as investors desperate for a bonanza are making beelines for companies linked in some way to presidential hopefuls.

But market observers warn that bubbles may be building as the stocks are highly volatile and, in many cases, may past their predicted peak.

According to the Korea Exchange (KRX), the combined market cap of 142 stocks linked to Korea’s political circle hit 15 trillion won ($13.3 billion) as of yesterday, up 50 percent from a year ago, while the benchmark Kospi rose 2.6 percent and the Kosdaq climbed 5.7 percent. It said 38 of the companies posted an operating loss last year.

The stock price of AhnLab, the anti-virus company founded by software mogul-turned professor Ahn Cheol-soo, jumped 239 percent to 129,300 won yesterday, compared to 38,050 won recorded on Sept. 14 last year. This came despite Ahn still keeping his cards close to his chest regarding whether he will make a run for the presidency.

However, yesterday’s price marked a 29 percent drop from 167,200 won on Jan. 3, hinting that some investors have already begin offloading their holdings as election day nears.

Shares of EG, owned by Park Ji-man, the younger brother of Saenuri Party presidential candidate Park Geun-hye, have jumped 130 percent on-year after fluctuating wildly, but it too is lower than the 87,900 won recorded on Jan. 3.

“Themed stocks have become increasingly volatile as election day approaches,” said an official at the KRX. “But individual investors must bear in mind that buying shares without considering the companies’ fundamentals may well end up eating a loss.”

In light of the 2007 presidential election, history suggests such stocks follow a predictable pattern, rising then plunging just prior to, or at the end of, the election.

Shares of Ilkyung, a company linked to Chung Dong-young of the United New Democratic Party, recently renamed the Democratic United Party, surged to a record high 4,945 won on Nov. 2, 2007, but plunged to 1,675 won five days later. After Chung lost the election, Ilkyung’s share price took another nose dive and trades at under 1,000 won.

“Most individual investors already know that politically-themed stocks surge despite their fundamentals, but they target stocks that show volatile movements to reap short-term profits,” said Ha Eun-su, an official at the Financial Supervisory Service’s (FSS) themed-stock investigation unit. “These people don’t make rational investments, even though they know they’re dealing with ticking time bombs. The bubbles that are building around these themed stocks will continue until the day of the election, and this trend will recur in five years’ time.”

The FSS launched its special investigation unit in January to crack down on people who overly inflate the prices of stocks related to the political circle prior to the election. In June, it referred 22 suspected stock-manipulation cases of to the prosecution.

Critics say that only large shareholders of related companies end up benefiting from the theme-stock frenzy. Many believe the chairman of Agabang & Company, a local baby clothing maker, netted 10.8 billion won in profit by selling his 620,000 shares at 17,000 won each earlier this year. Agabang is linked to Park Guen-hye of the Saenuri Party, who gained prominence after she expressed her will to tackle the nation’s low birth rate.

“Individual investors base their decisions on gossip and topical issues,” said Oh Gyeong-taek, a Seoul-based analyst. “They should make their own minds up by examining companies’ long-term growth potential.”