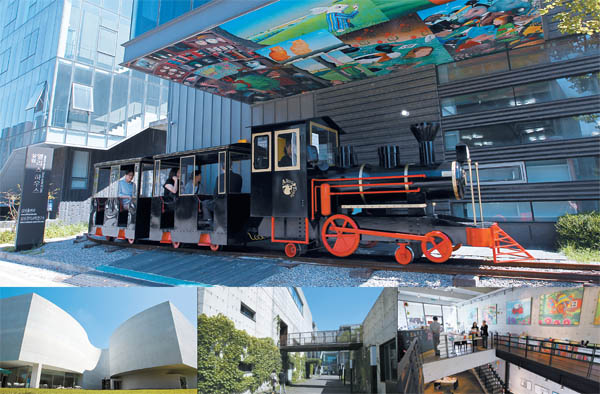 Counterclockwise, from top: A mini-railroad surrounding Alice House offers a short tour around Paju Book City; Mimesis Museum captures the attention of art-loving visitors; visitors stroll along a street in Paju Book City; and one of the buildings that houses domestic publishing companies. Provided by Paju Book City


The Paju Book Sori Festival is set to fling its door open today, bringing more than 200 publishers and some 300 cultural organizations to the city of Paju, north of Seoul. Marking its second anniversary, the book festival’s theme is “One Asia Through Books.”

This year’s highlights include a special program titled “Hangul Nadri 569” that offers an extensive collection of documents related to Hangul. A wide range of household items, such as paper patterns for making socks, talismans and tobacco pipes, will be on display.

A group of Hangul experts will also deliver a lecture on the 500-year-old alphabet.

In addition to writers from abroad, Korean authors Shin Young-bok, Kwon Young-min and Do Jeong-il will deliver a lecture and share their thoughts.

One of the main events is an exhibition showcasing rare old books, magazines and other documents from the National Library of Korea.

Visitors should take time to look at Australian children’s book illustrations and books chosen for their design excellence by the Korea Publication Ethics Commission.

In commemoration of the 250th year of the death of Jeong Yak-yong, one of the great thinkers of the Joseon Dynasty, visitors will have the opportunity to learn about his life and academic achievements.

Another event has been prepared to pay tribute to Kim So-wol, often described as a pioneer of Korean literature. Celebrating the 110th anniversary of his birth, the event consists of items of homage, poem readings, a performance with songs and a lecture.

In line with the event, there is a commemorative conference for Qian Liqun’s book titled “The Mao Zedong Era and Post Mao Zedong Era (1949~2009): An Alternative Writing of History.” Qian Liqun is a Paju Book Award winner and the author will discuss socialism, capitalism and democracy in China. 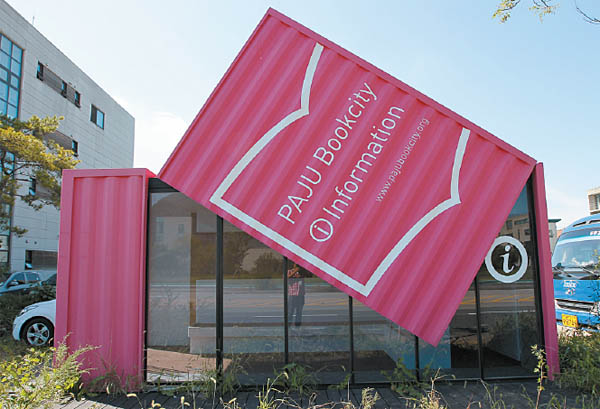 
In addition, there will be a cartoon class and lectures by well-known Webtoon artists.

Kim Sung-eun, a 34-year-old housewife, visited Paju Book City, a cultural complex where the Paju Book Sori Festival is held, with her husband and children last weekend. It was her first time at the book-oriented complex, although she frequently goes to other Paju attractions such as Heyri Art Valley and the Premium Outlet, a mega-sized shopping center.

She once passed by the industrial book complex and wondered what happens inside. When she got back home, she searched for “Paju Book City” and read other visitors’ reviews.

She said the arena was “better than expected.”

“I was surprised by a number of bookstores. They offered pretty good bargains, so I bought some books for kids. I was also impressed by the interior of the buildings [in the Book City],” she said. “I think my family will visit again soon.”

When it first opened in 2003, many called the complex “Siberia” because of its desolate look. Today, it is packed with more than 40 bookstores, unique book cafes, galleries and a theater for children, attracting many young families.

Lee Hyun-jeong, a 44-year-old housewife, is a regular. “I visit Paju Book City with my kids whenever I come to my hometown,” she said. “At first I had no idea where to go in the sprawling area and just went back home. But now, several bookstores have become my hangouts.”

Her favorite bookstore is located in the Alice House building. Bookstores are on the first floor of the building, while the second floor hosts book cafes and the third floor features classes and programs for children. A mini-railroad surrounding the book house gives visitors a tour around the complex.

“The number of mothers with their kids visiting this festival sharply increased after special events held on Children’s Day and last year’s Book Sori Festival,” said Kim Kwang-sook, an executive officer at Salim Publishing Company who is in charge of managing Alice House. “A lot of visitors come from other regions.”

Bookstores operated by children’s publishers have mainly brought family visitors with young kids to the Paju Book Sori Festival. The bookstores not only allow people to leisurely go around and read books, but have discount prices. Consumers can get a 30 percent discount for old books and 10 percent off new releases.

“We boast an extensive collection of books and bring out interesting content from the books, holding book events that engage children and adults alike,” said Song Young-man, chairman of the Paju Book City bookstore committee. “But so far each building looked somewhat isolated because not many people actually came and saw the cluster.

“We will tap all the content that publishing companies in the Book City can offer to be an established, reputed cultural industrial complex. We are working on planting trees and setting up benches and building more information centers to attract visitors.”