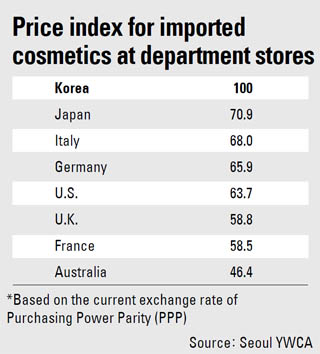 The prices of imported cosmetics in Korea were found to be the highest among nine developed countries surveyed based on inflation-adjusted prices as domestic retailers sought excessive profits, a study has shown.

Seoul YWCA, a non-governmental organization, released a report on Thursday comparing the prices of the top 10 imported cosmetics brands in Korea and eight other countries. The report was supported by the government-run Fair Trade Commission.

The survey compared the prices of 36 products, including essences, eye creams, compact foundations and lipsticks at department stores and duty free shops in major developed countries including the U.S., France, Germany, Italy, England, Australia and Japan.

The prices of Estee Lauder’s “Advanced Night Repair” and 18 more cosmetics products at domestic department stores were more expensive than in the other eight countries after being adjusted in line with the Purchasing Power Parity exchange rate.

Unlike the nominal exchange rate, this adjusts the purchasing power of consumers by taking into consideration inflation. With Korea set at a benchmark rate of 100, Japan ranked second with 70.9 - meaning Japanese products are roughly 30 percent cheaper by this scale - followed by Italy, Germany, the U.S., the U.K., France and Australia with 46.4 in last place.

The prices of imported cosmetics on Korean Internet shopping malls were also found to be the dearest.

Only some lipsticks, such as Chanel’s Rouge Coco Shine and Christian Dior’s Addict, were priced lower than in French department stores.

Additionally, when the prices of 36 imported cosmetics were compared by distribution channels, department stores set the highest prices. They were about 7 percent more expensive than in Internet shopping malls, 17 percent higher than parallel imports, and 24 percent higher than in duty-free shops.

“The government must revitalize parallel imports and disclose more information on imported cosmetics, including their production costs and profit margins, to keep consumers better informed of their choices,” said a Seoul YWCA official.

Other in the cosmetics industry complained that the survey ignored country-specific factors that determine prices such as import, labor, logistics, advertising and promotion expenses.