Ahn makes a surprise visit to May 18th cemetery

Ahn makes a surprise visit to May 18th cemetery 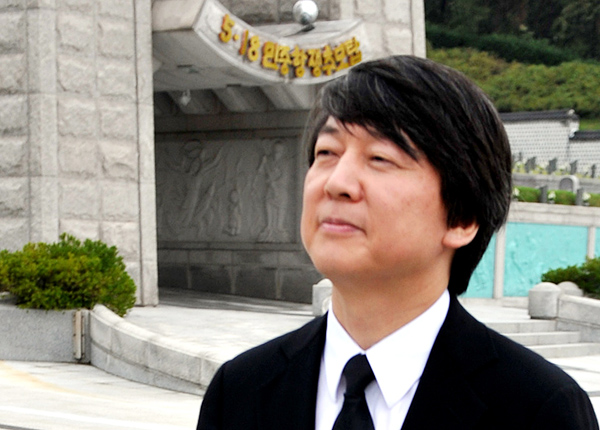 Ahn Cheol-soo views the May 18th National Cemetery in Gwangju yesterday and pays respects to former student activists who died in the May 18th massacre in 1980 under the military dictatorship of Chun Doo Hwan. [NEWSIS]


Ahn Cheol-soo, the not-yet-official candidate of the liberal faction, yesterday visited the May 18th National Cemetery to pay respects to former student activists who fought against dictatorial rule in 1980.

Ahn made a secret, surprise visit to the cemetery in Gwangju, where student activists who died during the Gwangju massacre on May 18, 1980, are buried. They were shot by military forces led by then-President Chun Doo Hwan. 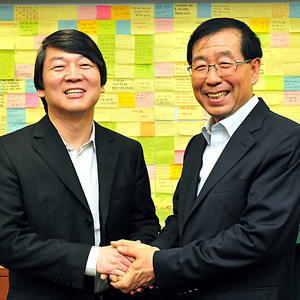 There, he paid tribute at the tombs of the former protestors and laid flowers on a monument.

When asked by reporters there why he visited the cemetery, recognized as a holy land of the Korean democratization movement, Ahn briefly responded he just came for “personal reasons.”

An aide to Ahn told reporters that the visit wasn’t planned, but Ahn had wanted to visit the cemetery for a long time.

After his 50-minute visit, Ahn wrote in the visitors book “rest in peace.”

So far, a string of presidential hopefuls has visited the cemetery, such as the ruling party’s candidate Park Geun-hye and the largest opposition party’s Moon Jae-in, before or after they declared their candidacies.

Speculation is running high that Ahn’s visit is a political move. On Wednesday, Ahn’s aide said that he will announce whether he will run for president after the largest opposition party selects its candidate.

Ahn’s visit came a day after he had a closed-door meeting with Seoul Mayor Park Won-soon, raising expectations that Park could help Ahn’s campaign in reward for his endorsement of the former civic activist Park during the October 2011 by-election.

Some political observers forecast that the mayor, a member of the DUP, could become a bridge to attract Ahn to the main opposition party, although Park said that they didn’t talk about politics at all.

Yoon Hee-woong, senior researcher at the Korea Society Opinion Institute, told the Korea JoongAng Daily that Ahn has appeared to position himself as an opposition candidate through the visit and will form an alliance with the DUP soon.

“The cemetery has been the first place many opposition candidates visited before or after they declared their candidacies,” Yoon said.