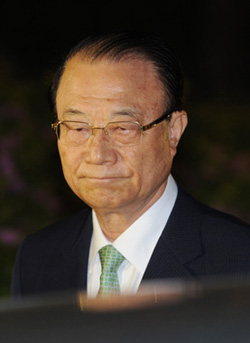 Choi See-joong, former chairman of the Korea Communications Commission and one of President Lee Myung-bak’s closest aides, was sentenced to two and a half years in prison yesterday and 600 million won ($535,093) in fines for taking bribes from a real estate developer in return for his influence to expedite the “pi-city” project, the Seoul Central District Court said.

Choi, 75, first faced accusations in April that he received 600 million won in bribes from Lee Jeong-bae, 55, the former CEO of pi-city, through broker Lee Dong-ryul on 13 different occasions from July 2006 to February 2008.

The broker said he gave 200 million won in additional bribes to Choi after Lee Myung-bak won the presidential election.

Choi said he used the money to fund Lee’s presidential campaign in 2007, but denied that he gave any funding to the real estate project in return. Choi was indicted by prosecutors in May.

“It is difficult to see that the money he received from the real estate developer wasn’t related to the construction project,” said chief judge Jeong Seon-jae in the ruling.