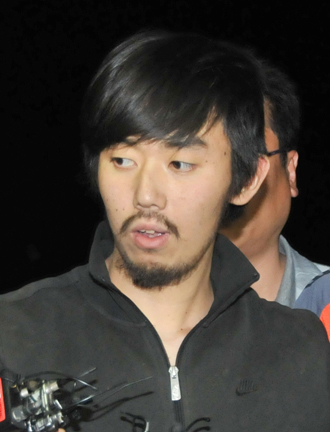 The suspect in the brutal murder case of two sisters in Ulsan was finally apprehended by police Thursday after being on the run for nearly two months.

The police arrested the 27-year-old suspect Kim Hong-il in Gijang County, South Gyeongsang, following a witness account given by a passerby in Hambak Mountain, who saw Kim sleeping covered in gunnysacks on Thursday afternoon.

The police then came and investigated Kim’s campsite. They confirmed it was Kim through fingerprints on discarded coffee bottles at the site. They then dispatched a special search unit, three search teams and search dogs to track down the suspect, and they finally caught him at around 5:30 p.m., about three kilometers (1.8 miles) away from the campsite. Kim only had 700 won ($0.6) in his pocket and his left arm was fractured when arrested, the police said.

The Ulsan Jungbu Police Precinct reported the victim sent him a text message saying she wanted to stop seeing him about one week before the crime, which took place on the early morning of July 20.

Around 3:00 a.m., Kim scaled the exterior gas pipe of a house in Jung District, Ulsan, went in through a window and fatally stabbed the younger sister in the neck with a knife he purchased a day earlier.

The suspect fled the scene after the stabbing but came back to the house again in less than five minutes when the older sister, his ex-girlfriend, was calling the 119 emergency number for her sister. The suspect also fatally stabbed the 27-year-old Park 12 times.

Investigators said Kim purposely stabbed the sister out of rage against Park.

“I went to kill my ex-girlfriend, but when I saw the younger sister I couldn’t help but stab her out of uncontrollable anger,” the suspect said during investigation, according to the police.

Kim discovered he had been placed on the wanted list by watching news on his television in the car. The killer drove his compact black Kia Morning vehicle to Busan after the killing and parked his vehicle along the road near the college he graduated from in Gijang County, Busan.

The murderer relocated to the nearby mountain after people began peering into his car. CCTV footage of the killer buying gimbap, or seaweed rice rolls, and water bottles at a convenience store near the mountain was discovered on June 22. The suspect managed to evade police search by hiding on the mountain for over a month.