There are increasing signs that students and 20-somethings are getting hooked on energy drinks in Korea, judging by sales at convenience stores and drinking fads at nightclubs, as the tightening job market puts them under more pressure to achieve top grades than ever before.

According to Link Aztech, which provides marketing information, the size of Korea’s energy drink market doubled to 39 billion won ($35 million) in July from 20 billion won last year. It stood at 4.6 billion won in March 2010 when energy drinks were first introduced to the country.

Industry sources put the global market at around $70 billion. 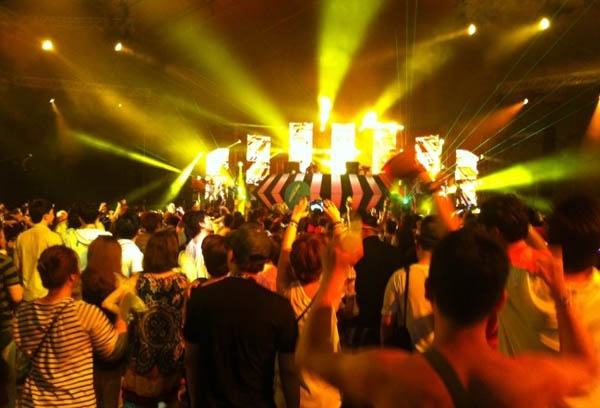 Electronic music acolytes at Ultra Music Festival Korea party like its 1984 in Jamsil, southeastern Seoul, on Aug. 4 by mixing energy drinks such as Red Bull and Hot Six with alcoholic beverages to keep tiredness at bay. By Seo Ji-eun

When compared to the same three-month period last year the difference is startling, with Hot Six at that time making up just 13.7 percent of the total to Coke’s 86.3 percent, the retailer said.

Hot Six hit the domestic market in March 2010, while Dongsuh Food, a local distributor of food and beverages, began importing Red Bull, the world’s No. 1 energy drink, in July 2011.

Shocked by their overnight success, other beverage makers quickly jumped on the bandwagon. 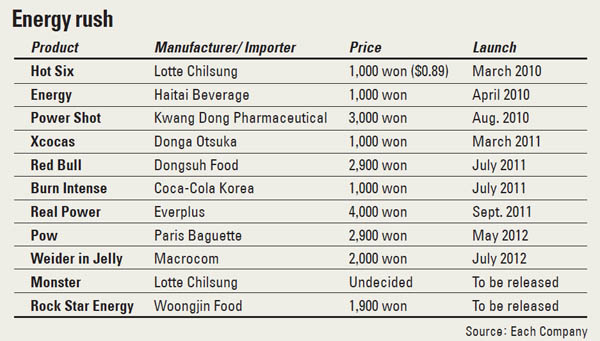 Meanwhile, Macrocom began distributing another product, Weider in Jelly, a kind of drinkable jelly from Japan, which has also proven a hit with younger consumers. Like many energy drinks, its active ingredient is taurine, a sulfonic acid that creates effects akin to ingesting a large dose of caffeine.

Additionally, Starbucks, the world’s No. 1 coffee chain by sales, launched its Refresher energy drink featuring natural caffeine at 450 stores nationwide last month, while Korea Ginseng Corporation (KGC) put its Real Red drink on the market containing caffeine and red ginseng extract. The KGC is marketing it as a healthier alternative to its rivals.

The world’s second-most popular energy drink Monster and No. 3 Rock Star Energy, both originally made in the U.S., are also expected to arrive in the domestic market soon, thus heating up the competition between local and foreign brands even more.

The main consumers of energy drinks were found to range from teenagers to people in their 30s. According to a survey by market research firm ACNielsen, teenagers accounted for 23 percent, 20-somethings made up for 41 percent, and 30-somethings represented 21 percent of their total sales at GS25. Heavily sweetened beverages like Coca-cola were excluded from the survey.

College kids are not just swigging cans to stay awake through lectures and extra-curricular language classes, or relying on six-packs of Red Six as they burn the midnight oil to get their homework and theses done on time.

They are also, apparently, mixing energy drinks to survive Korea’s notoriously hard-core drinking culture at night as they let off steam and socialize with friends.

“At parties, my friends and I always drink Jagerbombs, because they’re easy to drink, and they help keep you awake and energetic. I’d say this is the most popular drink at parties and clubs these days,” said a 23-year-old college student surnamed Yoo.

Physicians warn the drinks may pose a threat to children with diabetes or heart conditions.