Passion of Korean fans a hit with head of the WBC

Passion of Korean fans a hit with head of the WBC 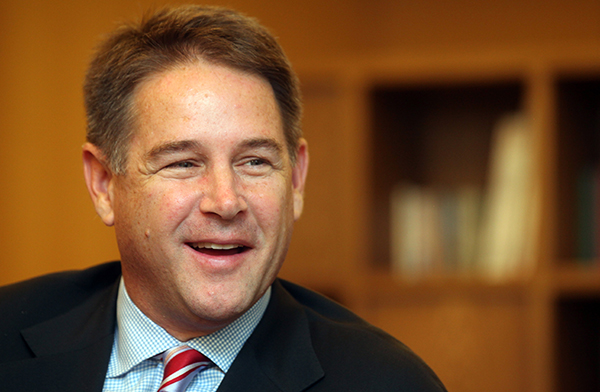 
Passionate and enthusiastic Korean baseball fans make their country a big contributor to the popularity of the World Baseball Classic (WBC) tournament, according to the event’s top official.

In a recent interview, Paul Archey, head of World Baseball Classic, Inc. (WBCI) or said Korean fans’ display of their support for the national team has been part of the “lasting memories” of the WBC.

“[Korea] is one of the most significant contributors [to the WBC tournament],” Archey said. “Most people would tell you, if not the best, it’s one of the best fan bases out there.”

The WBC was launched in 2006 as the first tournament to feature active Major League Baseball players representing their countries. The MLB created WBCI to operate the tournament. It was last held in 2009, and the next edition is scheduled for March 2013.

Archey, also senior vice president of international business operations for MLB, was visiting Seoul to share information about schedules and other details of the 2013 tournament with the Korea Baseball Organization (KBO). Korea lost to Japan in the semifinals and finished third in 2006, and was runner-up to Japan in 2009. Archey recounted memories of Korean fans’ withstanding a rain delay during the semifinal match at Petco Park in San Diego in 2006, and their enthusiastic display of support during the championship game at Dodger Stadium in Los Angeles in 2009.

Korea’s success at the WBC, coupled with the country’s baseball gold medal at the 2008 Beijing Olympics, has helped usher in an era of unprecedented popularity for pro baseball.

Yang Hae-young, KBO’s secretary general, said Korea would like to host the WBC matches in 2017, provided the country has its first domed stadium by then. Archey also said he would like to see a WBC round played here, though there would have to be a domed stadium that can hold big crowds for games in March.

“The No. 1 objective in creating this tournament was to give baseball a platform globally to help grow the game and to promote baseball,” he said. “Secondly, it was to facilitate grassroots development, and I think we’ve seen the impact of that.”

The WBC will hold a qualifying tournament for 16 nations for the first time. Four nations that didn’t win a game in 2009 plus 12 other countries will vie for four berths in the tournament to join the top 12 teams from 2009. The previous tournament featured 16 teams with no qualifying.

Archey said going from 16 to 28 “is the biggest change by far” for the 2013 edition, but it will “have an impact on more countries.”

Archey said another change will be a tighter schedule for next year. The 2009 event went from March 5 to 23, and he said organizers are looking to “take three or four days out of it.”

Scheduling tweaks would also mean fewer games between Korea and Japan than in 2009. The rivals faced each other five times, including the championship game.

Archey said that the recent revenue-sharing row involving Japanese players will have no impact on the WBC, stressing that the agreement with Japan is “consistent with agreements we have with 27 others [in the tournament].”

Japanese players had argued that they weren’t getting a fair share of the revenue pie even, though Japanese corporate sponsors helped generate a majority of the tournament’s profits in 2009. They had earlier said they would boycott the WBC and only rescinded the threat last week, after getting, in the words of officials with the players’ association, concessions over the way sponsorship and licensing revenues would be handled.

Archey said the issue in Japan was the one between the Nippon Professional Baseball, which runs the professional league, and the players’ association.

“We invite federations and leagues representing national teams to play in the tournament, and it’s up to them to reach an agreement with whatever players they have,” he said. “We’re happy that [the two sides in Japan] reached an agreement, which would allow their best players to play.”

The WBC overlaps with major leaguers’ preparations for the new season. Teams stacked with major league All-Stars, such as the U.S., Dominican Republic and Venezuela, haven’t performed up to their expectations.

Archey said it only proves the growing competitiveness and parity among participants, and rejected the notion that major leaguers maybe didn’t care as much about the WBC as others from Korea or Japan.

“I think it’s wrong to say that they didn’t care about it,” Archey said. “If there’s anything those players have learned from 2006 and 2009 that they will implement this time, it’s that they’re going to have to prepare a little differently. They know what to expect. I can tell you those teams - the U.S., Venezuela and Dominican Republic - are going to be more than prepared and ready for this tournament.”