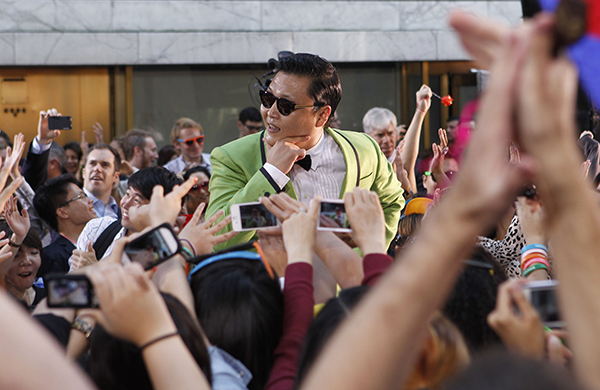 About a month ago, I was lucky enough to interview Psy, the man of the moment. On a purely selfish level, I’m glad I did: I don’t think any work I have ever done has gotten quite so much attention. Phone calls, text messages and e-mails came flooding in, asking my opinion on just about everything Psy-related, as though I were his best friend.

Similar questions came up repeatedly: What is the secret behind Psy’s success? What is it that he did that other K-pop stars, with all their training, Westernized melodies and laser-sharp dance moves, didn’t? Such questions inadvertently reveal the correct answer - it is precisely because Psy has found a niche in the exact opposite of all those things.

Psy is nothing new in Korea, but to friends of mine back home who think he is the coolest person of the year, he is a breath of fresh air. Most pop music - here and in the West - is too controlled, too stylized, too top-down and lacking in humor. For Britons and Americans, who have seen endless manufactured boy and girl bands since the invention of the teen culture, there is little need to import more. Psy, though surprises people, makes them laugh in the process. This is not something that can be deliberately reproduced.

Perhaps more importantly, the song itself is also very Korean. Whereas it is becoming normal for K-pop songs to be made in collaboration with American artists, producers and lyricists, and almost compulsory for them to contain English lyrics, “Gangnam Style” sounds “Made in Korea” loud and clear. That, combined with the hilarity of the video - which also has a uniquely Korean brand of slapstick comedy - makes it attractively different from an outside perspective.

It often occurs to me that this country has put itself in a mindset of needing to conform to “global standards” rather than simply being itself. I think about this every time I pass a sign in a station telling me to walk on the right, because this is what people in the United States, France and other “advanced” countries do. (British, by the way, walk on the left.)

Countries that punch above their weight in a cultural sense tend to go their own way. Though French people apparently walk on the right, they don’t do it because Americans do. If you told them the rest of the world also walks on the right, they might switch to the left.

The innate self-confidence of French creators and their willingness to be stubbornly different are at the core of what makes French culture attractive and desirable.

Japan is also resolute in its Japaneseness. Of all the wealthy, industrialized nations, it stands out as the most bizarre and impenetrable. I understand Japan about as well as I understand the significance of the Higgs-Boson. But its sheer difference and refusal to adapt its culture to suit the rest of the world makes it more interesting.

Another question that kept surfacing regarding Psy was: “Isn’t he B-class?” Aside from the obvious question - What kind of pop music is ‘A-class?’ - there is a kind of attraction in something a little bit cheeky or rough around the edges. Are we all not a mixture of A- and B-class tastes, if we are honest?

When I look at tourist literature promoting Korea, everything looks rather sanitized and A-class - come and see this pansori show or visit this traditional folk village. I won’t deny the value of such things, but a little edginess and unpredictability mixed in would make Korea seem a lot more human and, indeed, attractive. Then there is Arirang TV, which presents Korea as a kind of earthly paradise in which nothing bad ever happens. The trouble is, this vision isn’t believable.

Old friends of mine who visited Korea enjoyed looking around palaces and all the other places they were “supposed” to like. But they also cherished drinking in pojangmacha (small tented restaurants on wheels), seeing graffiti and buskers in Hongdae and eating food that for some bizarre reason people assumed was “too spicy” for them to handle. And they loved Korea not because of the things that were “globalized,” adapted to Western tastes and presented in English - they loved it because of the things that weren’t.

I think that the case of Psy offers a lesson for Korea’s various tourist promotion and national branding agencies. An attractive country celebrates its uniqueness. It impresses you with its A-class and makes you laugh with its B-class. Frankly, Korea is my favorite country, but when I see it advertised as a tourist destination, I hardly recognize it.

* The author is the Seoul correspondent for The Economist.