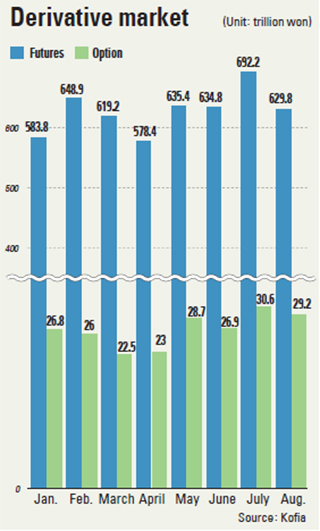 Is it a fair taxation or is it taxation driven by a political agenda?

With the presidential election approaching, the financial industry and government are locked in a heated debate over the taxing of financial derivative transactions, which could be adopted as early as 2016.

The government argues that taxing derivative trades would further strengthen the nation’s fiscal balance by adding an estimated 140 billion won ($125.3 million) annually while limiting the rampant speculation that is hurting the financial industry.

However, the financial industry has raised concerns that such a move would drive out foreign and domestic investors, thereby putting the entire industry at risk and eventually reducing that amount of taxes that would be collected.

One of the biggest agendas in the political campaign has been implementation of so-called economic democratization, which would tighten control over profiteering by financial companies and top-tier income earners.

The Finance Ministry last month unveiled a plan to tax the value derivative transactions at rates of 0.001 percent on futures trades and 0.01 percent on option trades.

The government’s position is any sector that generates income and profit should not be exempt from taxation. Already, stock trades are taxed at an effective rate of 0.18 percent.

“Considering the abundant liquidity in the derivative market, the market contraction caused by taxation will likely be limited,” Hong said. “The financial transaction tax is a policy that would tone down excessive speculation in the financial market, while increasing the government’s tax revenue.

“The government’s tax-free policy has helped turn the local derivative market into a global market. But at the same time, speculation has become rampant.”

Although there will be a grace period for implementation of the derivatives tax, the government is confident Korea’s financial market has grown to the level where the impact will be limited.

It estimated that futures and option transactions would shrink 13 percent and 14 percent, respectively, under the tax.

The financial industry is not happy about the new tax, insisting it will only reduce growth.

Park Jong-soo, chairman of the Korea Financial Investment Association, predicted that taxing derivative transactions would only create another crisis for financial markets.

“Stock trading has recently shrunk significantly due to external uncertainties, including the euro zone crisis,” said Park. “As a result, the financial industry is facing a severely difficult situation as their profits on commissions on stock trading have fallen.”

He added that the derivatives market is especially important for expanding price efficiency and as a way for investors to hedge their risk.

“Taxing derivative trading would not only downscale the market, but could also threaten the overall financial investment industry,” Park said.

The Korea Capital Market Institute estimated that if the tax on futures and option transactions is implemented, futures trading annually will shrink more than 20 percent - from 33 trillion won to 26 trillion won - while option trading would drop 11 percent to 1.1 trillion won.

“Between 2009 and 2011, of the total commission income that brokerage firms have made in financial investment products, futures and option commissions took up 10 percent and 12 percent, respectively,” said Jun Kyun, senior analyst at Samsung Securities. “Brokerages will inevitably suffer if these products are taxed.”

At the end of June, there were 1,744 branch offices of 62 brokerage firms registered under Kofia, down from 1,799 a year ago. In just a year, brokerage companies have cut 190 jobs through retirements, attrition and involuntary departures. As the market remains bleak, there is speculation the brokerage industry is considering eliminating more jobs.

In July, the Korea Exchange reported that if the taxes on derivative transactions are implemented, annual tax revenue would amount to 79 billion, compared to the government’s estimate of 140 billion. This would represent 1.2 percent of the 6.8 trillion won in taxes the government collected last year from all securities transactions.

In particular, the financial industry argued that investors would likely turn to the Chinese derivative market, which has grown rapidly in recent years.

Industry representatives say that instead of levying taxes on the total value of transactions, the government should tax only the capital gain, as do the United States, Japan, France and Germany.

“The government seems to be focusing on the tax revenue that it could generate from the derivative market, but the impact the taxation could have on the derivative market is not limited to the financial market, it could also disrupt the overall economy,” said Nam Gil-nam, head of financial investment products at Korea Capital Market Institute.