QPR battles Chelsea to a draw

QPR battles Chelsea to a draw 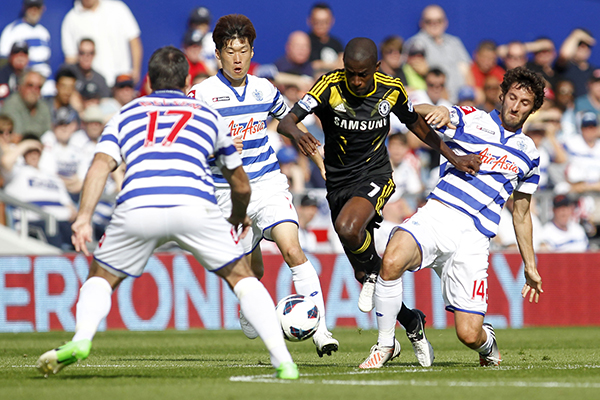 
Chelsea dropped its first points of the season in a 0-0 draw against local rival Queens Park Rangers, and the non-handshake between Anton Ferdinand and John Terry upstaged big home wins by Arsenal and Manchester United in the English Premier League on Saturday.

Arsenal’s 6-1 thrashing of Southampton and a 4-0 victory for United over Wigan - sparked by Paul Scholes’ goal in his 700th game for the club - allowed both teams to leapfrog defending champion Manchester City, which was held to 1-1 at Stoke.

A top four filled with the likely title contenders is led by Chelsea, whose perfect start to the campaign ended with the stalemate at QPR in a game overshadowed by Ferdinand’s snub of Terry in the pre-match handshake.

It continued their feud following a racism row that began last season when Terry, the Chelsea and England defender, was accused of racially abusing Ferdinand in the corresponding match at Loftus Road.

Terry was acquitted in court in July but awaits a Football Association charge relating to the same case, and feelings continue to run high.

Ferdinand snubbed both Terry and Ashley Cole, who gave evidence on behalf of his Chelsea teammate in the court case, in the team handshake while Terry was booed and jeered throughout by a hostile crowd.

“Everybody focused on the football and of course there would be high emotion but both sets of players played very professionally,” Chelsea manager Roberto di Matteo said. “As far as we are concerned, our players offered [their hands to Ferdinand] and if the other player doesn’t want to receive it, then we move on.”

After three straight wins, Chelsea will not be too unhappy with a point after being stretched for long periods by a west London neighbor that has picked up only two points in four games this season.

Park Ji-sung, who also refused to shake Terry’s hand, headed a great chance straight at Chelsea goalkeeper Petr Cech before Bobby Zamora wasted another second-half opportunity after intercepting a dreadful back pass by John Obi Mikel. After dribbling around Cech, Zamora’s shot was cleared off the line by Terry.

“We acquitted ourselves really well,” QPR manager Mark Hughes said. “We were assured and calm and we dictated to the European champions for long periods.”

Chelsea is a point clear of United, whose third straight victory came after four second-half goals at Old Trafford.

The 37-year-old Scholes scored his 163rd goal for United to put the team ahead in the 51st minute before strikes by Javier Hernandez, Alexander Buttner and Nick Powell - the last two scoring on their debuts - in a 20-minute span. Arsenal condemned last-place Southampton to a fourth successive loss with a masterful attacking display that could help fans forget about the departure of Robin van Persie, who was on the bench for United on Saturday ahead of the start of the Champions League next week.

Gervinho, playing as a central striker instead of his usual place on the wing, scored twice while Arsenal was helped out by two own goals. Lukas Podolski and Theo Walcott were the other scorers at Emirates Stadium.

Manchester City dropped points for the second time this season, needing a goal by Javi Garcia in the 35th minute to cancel out a controversial early effort by Peter Crouch, who appeared to handle the ball in the buildup to his goal.

Swansea lost 2-0 at Aston Villa following goals by Matthew Lowton and Christian Benteke. West Brom and Swansea were unbeaten and in the top four at the start of the day.

In Spain, Sevilla struck early and held on to deal Real Madrid a 1-0 loss as the defending Spanish champions fell eight points behind pacesetter Barcelona on Saturday. A short-handed Barcelona, meanwhile, routed Getafe 4-1 as Lionel Messi went on with half an hour to play and added to Adriano’s opener with a pair of goals before David Villa netted to keep them perfect in league play.

Also, Valencia beat Celta Vigo 2-1. Former Arsenal forward Park Chu-young of Korea made a debut for Celta Vigo as he was substituted in the 71st minute of the match.