The government has been busy rolling out measures to protect merchants at traditional markets from the growing encroachment of big retailers, but market observers say policies should also be directed at shopping districts run by self-employed small businesses struggling with plunging sales.

On a recent Sunday afternoon, Ahyeon Furniture Street, the go-to shopping district for furniture that stretches 330 square meters (3,500 feet) from Chungjeongro Station to Ahyeon Station in central Seoul, seemed like a ghost town, with most of the shop owners anxiously awaiting customers. 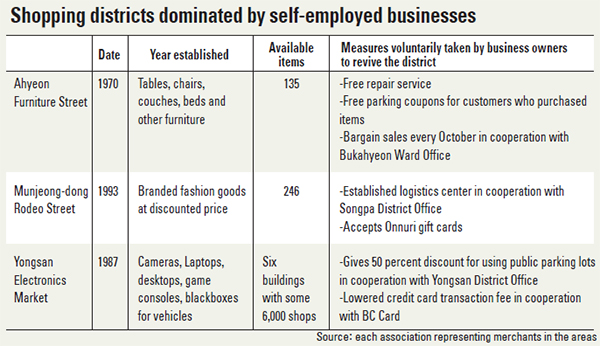 There are around 130 shops in the district that offer discounted prices on furniture from tables to chairs, couches and beds.

“I haven’t received any orders from wedding couples for two months straight, even though September is known as peak wedding season,” said a shop owner who identified himself as Lee. 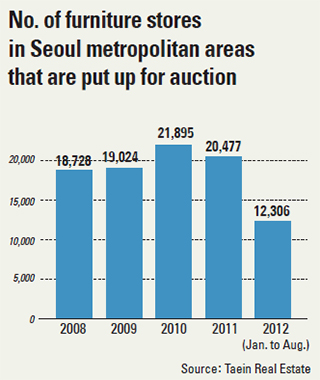 “When business was good, each store hired at least two employees, one as a sales representative and another as a deliverer, but as we’re earning much less than we did in the past, we had to cut every expense including manpower,” said Kim Sang-seok, another furniture shop owner. “Now there are many who work all alone.”

Song In-kyu, another business owner in the district, confessed that he now barely earns 30 million won ($26,759) per month, much lower than the 50 million won average he raked in during previous years.

“The government needs to come up with measures to support self-employed business owners by giving financial aid to help them organize a bargain sale festival for an entire shopping district, set up a mileage card policy where customers can use it like a cash in return for buying goods there, or kicking off shows and events to attract visitors,” said Sohn Jae-young, a real estate professor in Konkuk University.

Munjeong-dong Rodeo Street, a popular destination in southeastern Seoul for fashion enthusiasts to grab branded clothing at a reasonable price, is a case in point.

MU Sports and another sportswear shop Inter Sports closed in July, while CJ Foodville’s coffee and cake house A Twosome Place and Japanese fast fashion retailer Uniqlo are scheduled to open new outlets there, according to merchants in the area.

“Now young people shop at Garden Five Shopping Mall, which is just a 10-minute drive away from here,” said Lee Jong-deok, head of an association representing merchants along Munjeong-dong Rodeo Street. “Sales in the first half of the year were cut 30 percent compared to a year ago.”

In order to lower renting fees, other self-employed owners chose reducing the store size by moving to smaller shops.

Casual fashion brand Tate’s Munjeong store occupied a combined 330 square meters of a two-story building, but now it has moved to a new place that is one-third the size.

“Shops in Myeong-dong [central Seoul] kept their air conditioners on to lure shoppers during the hot summer, but we were okay with fans because we had very few customers,” said a sportswear store employee.

Three out of every 10 stores in Yongsan Electronics Market, the destination for all things electronic, are empty. Already half of the electronics shops at the Yongsan Termnial Electronics Building located nearby Yongsan Station have closed their stores due to the coming Yongsan International Business District.

“I had a hard time making ends meet when netbooks boomed last year, but things got worse and I now earn 10 percent less than what I did last year after tablets have been replacing netbooks,” said Woo Sang-yong, a merchant who has been running a laptop store for nine years at Yongsan.