An aerial, computer-generated view of a street in Bismayah, Iraq.

Hanwha E&C has signed an $8 billion deal to participate in the Bismayah city project in Iraq, the largest new city construction project ever won by a Korean construction company overseas. Iraq’s National Investment Commission already provided Hanwha with a $775 million advance payment on Thursday, or 10 percent of the total construction cost of $7.75 billion.

This money was delivered from the new city construction project budget secured by the Iraqi government, and Hanwha E&C will begin with constructing 100,000 houses. 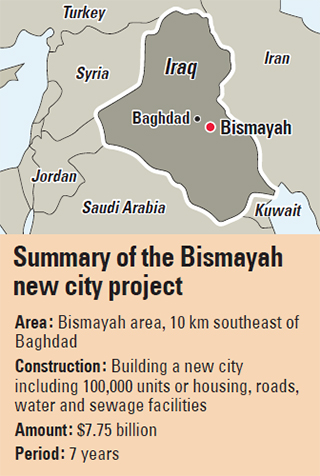 Hanwha E&C CEO & Vice chairman Kim Hyun-chung, who is on a month-long stay in Iraq, said, “There were many difficulties until now, but with the faith of the Iraqi government and Hanwha’s strong will to succeed on this project, we have made the deal come true.”

“This is very exciting news for Hanwha and the 100 subcontractors that will be participating in this project,” he continued. “There will, of course, be unexpected difficulties in the future, but we will complete our selection of subcontractors and organizations within our group as fast as possible and concentrate on the construction.”

The new city project contract was signed on May 30, and since then, the Hanwha E&C team in Iraq has increased to 350, and the company is currently preparing for construction and focusing on design. In early September, an initial camp was set up on the construction site, and as the advanced payment was made, a mobile team will now be stationed at the site to start soil preparation and ground work construction.

The company hopes this will be a successful case of co-development involving both conglomerates and small- and medium-sized companies. And by creating more than 550,000 jobs a year, it will be a good opportunity to overcome economic difficulties.

This Bismayah new city project is being conducted with a “Design Build” method where Hanwha will be in charge of design, supply and construction. At 1,830 hectares (4,522 acres), the city 10 kilometers (6.2 miles) southeast of Baghdad will contain 100,000 houses and infrastructure such as roads and water and sewage facilities. The designs were made to reduce production costs, and for about a year, the project design was reviewed to check if the production cost was suitable. The total construction period is seven years, and the order value is $7.75 billion. Since the contract includes a provision for inflation adjustment, the total value will reach $8 billion.

Since Hanwha E&C will be building the 100,000 residential units and infrastructure at once, the project will be done through a PC (precast concrete) method.

The PC method produces the subsidiary materials such as pillars, walls and beams at a factory and later sets them up at the construction site. It reduces the construction period and does not fall behind in economic feasibility or quality. This method was used during the Libya residential construction project by a Korean company. Once this project is on track, Hanwha E&C will be constructing and supplying a Jamsil 3 apartment block (4,000 houses) every two months.

For this project, Hanwha has constructed the world’s largest PC factory near the construction site and will be in charge of the big task of constructing the largest-scale new city in overseas construction history.

About 1,700 employees will be working in the PC factory to produce 20,000 slabs and walls per year. About 6,400 tons of concrete will be used per day, approximately the volume of 430 ready-mix trucks. Since this project needs 26,000 staff per day, including on-site staff, the company is planning to create a 120-building base camp on 1,100,000 square meters of land.

The Iraqi government will be in charge of the financing and house sales of this project, and Hanwha E&C will be in charge of designing and constructing the residential units and the infrastructure. Since last year, the government has started selling houses to its civil workers. The subscriptions have been completed successfully for all 100,000 units, and the house installment contracts will be finalized shortly. The Iraqi government will provide financing from its treasury and also used funds received from buyers of the apartments. Rasheed, TBI and Rafidain, the three state-run banks of Iraq, have promised to certify the payments.

In the meanwhile, through active consulting and support from the Korea EXIM Bank and Korea Trade Insurance Corporation from the beginning of the project, the company was able to reduce risks in contract and warranty.

Even later on, active support of Korea EXIM Bank and Korea Trade Insurance Corporation is expected when issuing guarantee certificates for advances received and also when issuing bonds.