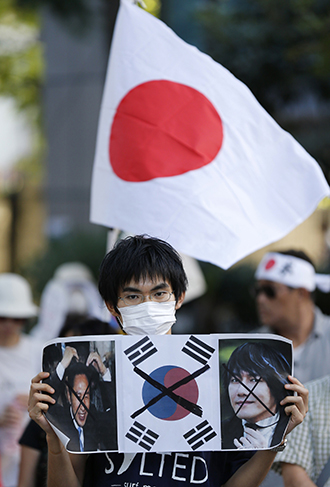 A Japanese right-wing activist said Saturday he would not honor a summons by Seoul prosecutors to appear for questioning over his alleged provocative act over Korea’s easternmost islets of Dokdo.

Nobuyuki Suzuki was sued for defamation by a group of former Korean sex slaves for Japan’s wartime soldiers. He was accused of having tied a wooden post to a symbolic statue of a sex slave in front of the Japanese Embassy in downtown Seoul in June.

Korean prosecutors earlier this month issued a summons for the activist to appear for questioning on Tuesday. Suzuki, however, posted an Internet message Saturday denying any wrongdoing.

“I’m busy with another appointment [on Tuesday], and I don’t think I committed any crime,” Suzuki wrote in the message posted on his blog.

Historians say up to 200,000 women were forced into sexual slavery for Japan’s World War II soldiers.

Seoul is pressing Tokyo to pay compensation and extend a formal apology to the victims but Japanese leaders refuse to do so, saying the matter was settled by a 1965 treaty that normalized relations between the two countries.

Korea-Japan relations deteriorated recently amidst Japan’s renewed claims over Dokdo and its leaders’ frequent denial of the country’s wartime atrocities.

In Tokyo, dozens of Japanese gathered on Saturday in a protest against Korea and China.

Tensions are even higher in China as the two countries quarrel over who owns islands in the East China Sea.

Thousands of protesters gathered outside Japanese Embassy in Beijing yesterday, a day after demonstrators tried to storm the building. The crowd threw beer bottles and golf balls and shouted anti-Japanese slogans, waved Chinese flags and sung the national anthem.

Beijing was infuriated last week when Japan announced it had bought the disputed islands, which it administers and calls Senkaku, but which China claims and calls Diaoyu. Protests took place around the country yesterday.

Tens of thousands of people had demonstrated in at least a dozen cities across China Saturday, with attacks on Japanese-made cars and Japanese restaurants and businesses.

According to Xinmin Evening News, China Central Television acknowledged it will stop running TV commercials for Japanese products through tomorrow.