Typhoon to drench the peninsula

Typhoon to drench the peninsula 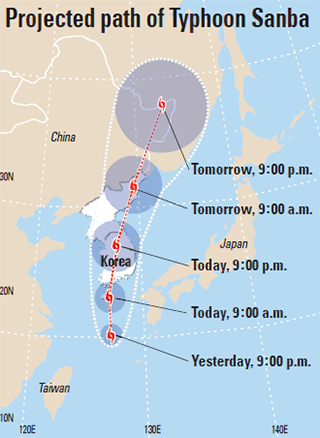 The 16th typhoon of the year is headed for Korea, prompting the state-run weather agency to issue heavy rain advisories yesterday for Jeju Island and southern regions.

The Korea Meteorological Administration reported yesterday that Typhoon Sanba, named after a section of Macau, will reach 70 kilometers (43 miles) east of Jeju Island at 9:00 a.m. with winds of up to 148 kilometers per hour today on its way toward the mainland. “Jeju Island will be drenched with up to 300 millimeters [11.8 inches] of rain until Tuesday night,” said the weather forecaster.

The typhoon is projected to pass the coastal city of Yeosu, South Jeolla, at noon and reach 90 kilometers southeast of Seoul at 9:00 p.m., bringing heavy rainfall to the capital city with maximum wind speed of up to 112 kilometers per hour.

Seoul is expected to see more than 100 millimeters of rain from today, according to the weather agency. 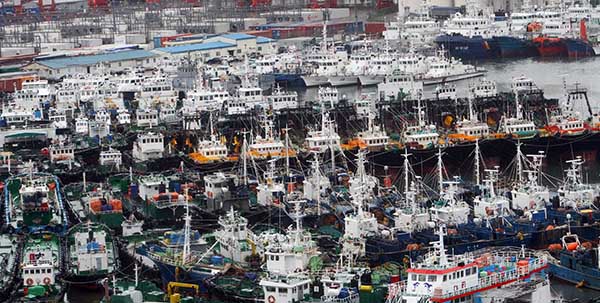 Thousands of ships take shelter in the southern port of Busan yesterday as a powerful Typhoon Sanba was approaching the country. [NEWSIS]


The intensity of the upcoming typhoon was described as “very strong,” with wind speed reaching 173 kilometers per hour early yesterday, when it was 80 kilometers north of the Japanese island of Okinawa.

Flights in and out of Jeju after 6:20 p.m. yesterday were canceled, 76 in all. As the typhoon was moving toward Korea yesterday, Jeju and some southern regions started getting rain during the day.

The Ministry of Public Administration and Security convened an emergency meeting yesterday to come up with a number of preventive measures.

Ferry services and vessel movements at ports on Jeju Island and southern coast came to a halt.

The Military Manpower Administration said yesterday it canceled the reserve force training around the country scheduled for today.

Hikers are also banned from entering national parks in major mountains around the country.

The typhoon will make its way out of the country and into North Korea, passing 20 kilometers of the northeastern city of Chongjin in North Hamgyong Province, at a speed of 46 kilometers an hour on Wednesday morning. Sanba comes less than a month after Typhoon Bolaven hit the country in late August, which left 10 dead and over 200 people temporarily homeless, mainly in the south.

Another tropical storm, Tembin, which came less than a week after Bolaven, flooded the coastal city of Mokpo, South Jeolla, for the first time in 12 years by dropping over 170 millimeters of rain on Aug. 30.