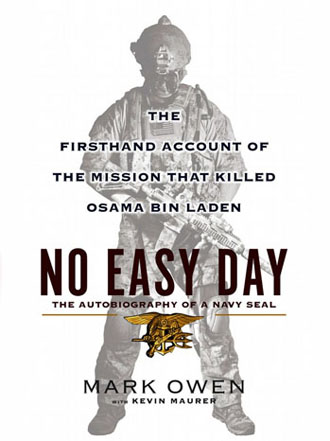 
Some details are mundane: Terrorist leader Osama bin Laden wore a sleeveless white shirt and tan pants when he was shot and killed by U.S. Navy Seals, he used Just For Men to dye his beard, he was a neat freak. Other details seem significant, even troubling: the unarmed bin Laden was shot after peeking out from behind a door, a young girl - perhaps a daughter - was the first to identify him, and an American serviceman, lacking adequate space in a Black Hawk helicopter, was forced to sit on the dead man’s chest.

The memoir, written by Owen (a pseudonym, the author was subsequently identified in media accounts as former Navy Seal Matt Bissonnette) with co-author and former journalist Kevin Maurer in the year after 2011’s Operation Neptune Spear, which killed bin Laden at his family’s compound in Abbottabad, Pakistan.

The actual raid consumes only as many pages as it did minutes in real life - about 40 - but the rest of “No Easy Day” (its title is derived from SEAL philosophy: “The only easy day was yesterday”) is anything but filler. It’s a remarkably intimate glimpse into what motivates men striving to join an elite fighting force and what keeps them there.

Owen describes the physically and mentally grueling training. And he doesn’t shirk from alluding to the failed relationships left behind.

Little more than a day after killing bin Laden, Owen found himself driving home in Virginia Beach. His disorientation was acute. He pulled into a Taco Bell drive-thru and ordered two crispy tacos, a bean burrito and a Pepsi. The reality of the history he had helped create began to sink in.

“This was pretty cool. It was the kind of mission I’d read about in Alaska as a kid. It was history,’’ he writes. “But just as quickly as those thoughts crossed my mind, I forced them out. The second you stop and believe your own hype, you’ve lost.’’

Owen says he just wanted some quiet. And in telling his story, all of it, it seems clear he got it.