Chabon back, in style, with ‘Telegraph Avenue’

Chabon back, in style, with ‘Telegraph Avenue’ 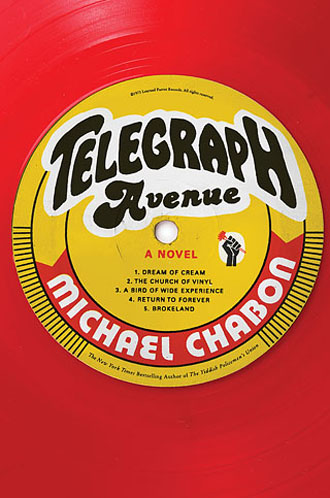 It’s been more than a decade since Michael Chabon won the Pulitzer Prize in fiction for his epic “The Adventures of Kavalier and Clay,’’ and since then he’s kept busy with a steady stream of genre riffs, essays, young adult fiction and comic books. With his new novel “Telegraph Avenue,’’ it feels like he’s finally delivered a proper follow-up.

But where “Kavalier and Clay’’ spanned continents and decades with its story of comic book pioneers, “Telegraph Avenue’’ is homey and intimate as it dives deep into the lives and struggles, over just a few weeks, of two Oakland, California, families in August 2004.

Archy Stallings and Nat Jaffe, longtime friends and amateur jazz musicians, together own and manage Brokeland Records, a used record store along the Oakland-Berkeley thoroughfare of Telegraph Avenue. Their wives, Gwen Shanks and Aviva Roth-Jaffe, are the Berkeley Birth Partners, midwives mostly catering to upper-middle class Bay Area hippies who want the natural birth experience. Nat and Aviva’s 14-year-old son Julius has recently befriended another teenage boy, Titus, whose own link to Archy becomes clear as the novel proceeds.

Both the partnerships, and ultimately the friendships, of both Nat and Archy and Aviva and Gwen are tested over the course of the story. The men face potentially devastating competition in plans by an ex-football player-billionaire and hometown boy to open a massive entertainment superstore just down the street. The women reel from a home birth that goes disastrously awry, resulting in the possible loss of their privileges at a local hospital and the threat of a lawsuit.

The Stallings’ home front isn’t in much better shape. Gwen, hugely pregnant herself, struggles with Archy’s occasional infidelities. Archy grudgingly contends with the mysterious agenda of his father, Luther Stallings, a washed-up star of several 1970s blaxploitation movies who wants to stage an unlikely comeback. Nat and his wife grapple with their son as he takes his first tentative steps out of the closet.

There’s a lot going on in “Telegraph Avenue,’’ but Chabon isn’t overly concerned with pulling plot strings. He’s much more interested in exploring the ties that both bind and separate the Stallings, who are black, and the Jaffes, who are Jewish. Chabon has a light, skillful touch on the topic of race, never coming across as preachy or guilty. He’s much more heavy-handed in the book’s nearly constant chorus of pop culture references, which sometimes feel too geared toward a certain type of reader and probably could have been dialed back a little bit.

But that’s a mild complaint for a book that’s a thorough pleasure to read. Chabon, who calls Berkeley home, is a truly gifted writer of prose: He writes long, luxurious sentences that swoop and meander before circling back in on themselves, not infrequently approximating the improvisational jazz that Archy and Nat hold so dear. Here he describes Gwen glimpsing teenage Julius, asleep on her living room floor: “The hollow of his hairless chest, the puzzled knot of his brows, the soft straight hair pasted by night sweat across his bony forehead, all stirred deep memories of the nights when she used to watch him for Aviva and Nat, sing him her grandmother’s grave lullabies.’’

With passages like that, “Telegraph Avenue’’ conveys a powerful sense of the passage of time. The novel is full of births and death, summer turning to fall, boys becoming men, grown men and women finally relinquishing childish ways, old men trying to make up for mistakes of their youth. While lacking the sweep of “Kavalier and Clay,’’ this new novel in its sheer accumulation of observation and detail takes on its own kind of epic momentum.

Plenty of well-meaning people make bad decisions in this book, but “Telegraph Avenue’’ is never really a downer. Chabon’s deep affection for his characters, along with the ornate vibrancy of his prose, give the entire book a lovely sense of buoyancy. It feels, to borrow Chabon’s description of the leisure suit of an Oakland-legendary jazz organist who frequents Brokeland Records, “profound and magical in its excess.’’